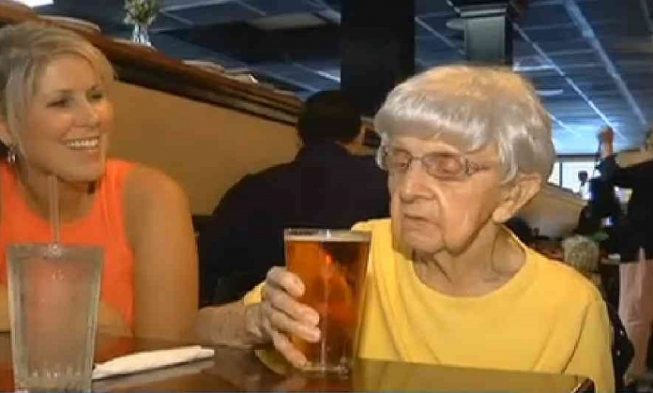 There are different opinions among the people about how useful is to drink a beer. One of the most interesting opinions comes from the woman from South Carolina, who was almost 103 years old. She said that her secret to a long life is exactly drinking a beer. (1)

Mildred Bowers, who goes by Millie, was interviewed WCSC Live 5 News a few weeks before her 103rd birthday in 2016.

Bowers, who has quite a bit of life experience, resides in Mount Pleasant, South Carolina. She went through the Great Depression in her life, but she outlived two husbands.

She told WCSC Live 5 News: “My mind is good, I have no problem with that and that’s the big thing that a lot of people my age don’t have at my age is a good mind,” she said.

Her friend Janelle Sherman, who took her out for a lunch, explained about her youthful appearance. She told WCSC Live 5 News: “I’m jealous of her skin. I’m jealous of how beautiful she looks.” (1)

When she was asked, like many of the fortunate people who live to or beyond the age of 100, what is the secret to her longevity, her answer was very simple: “Have a beer.”

Besides ordering beer during lunch, she also has one daily at the assisted living facility where she lives. She was talking with the personnel of the facility about her love for this bubbly beverage. The nurses were surprised about her habit and asked the doctor if it would be all right for her to drink it, but he approved the request.

She also recommended for other seniors to drink beer, but only if they like it. According to her, it is very important to get what you like, so, people should be understood when they don’t like coffee or tea.

However, for Bowers there is one more secret to long life beyond drinking beer: “It’s all in the genes.”

Many centenarians, like Bowers, recommend drinking alcohol to live longer. For instance, in 2015, a 109-year-old British woman said that whiskey was her secret to a long life. (2)

According to Grace Jones from Broadway, Worcestershire in England, a drop of whiskey every night has helped her to live that long. Speciously, it was working for her because she reported that she felt the same as she did in her 60s. She didn’t have any physical complaints, except for some hearing loss. Additionally, she was without aches or pains, and she maintained a good appetite. (2)

Another case was a 110-year-old woman,  Agnes Fenton from New Jersey (in 2015), who attributed her many years to alcohol. When Agnes Fenton got a benign tumor, the doctor recommended that she drink three Miller High Lifes each day. She had been following doctor’s advice for 70 years, and even added a shot of Johnnie Walker Blue Label. (3)

Maybe that longevity is because of the alcohol itself or simply because of the enjoyment the people take from it, but cases of these seniors seem to discover something important, something special.