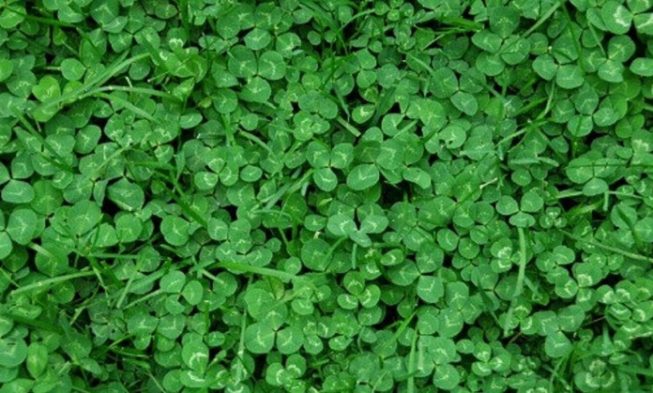 Many people want to make their yard wildlife friendly and more sustainable, but still, they still want a soft patch of grass to play on. All these requirements they can afford by planting clover. Clover is a plant, which is softer than grass and doesn’t need to be cut, weeded, watered, or fertilized.

This plant can be either mixed with current grass or completely alone.

Besides the advantages that it doesn’t need fertilizer or herbicide and requires little to no mowing or watering, meanwhile, it improves the soil, attracts bees and butterflies, as well as other beneficial bugs for your garden.

In the last decade, a new variety of white clover has become the trend across Europe and is just becoming a thing in the United States. It is called microclovers, which are smaller and don’t grow so many flowers. Additionally, they have softer stems for sitting and walking on.

Until the 1940s it was pretty universal for Americans to use clover, but then people started using herbicides to kill off dandelions and other broadleaf “weeds,” so clover was a casualty of this procedure.

According to Laid-back Gardener, there are 11 benefits of planting clover instead of grass:

As a legume, clover has the ability to work symbiotically with bacteria and fixes the atmospheric nitrogen, making it available to both itself and neighboring plants. It actually allows even lawn grasses to grow better when the clover is present.

Because of the deep roots, clover will remain green through drought, comparing to the neighbor’s lawns that turn brown.

It doesn’t need mowing, however those who decide to mow, they’ll only need to do it 3 or 4 times a year.

As the clover can grow in loosen compacted soil, the need to aerate is eliminated.

Those who plant clover don’t have to worry about other “weeds,” because clover tends to smother them as is somewhat invasive.

It is used as an excellent ground-cover for food crops.

The attractive white flowers of the clover attract beneficial pollinators like bees and butterflies and provide forage for rabbits.

The pesky insects are discouraged by a lawn rich in clover because they prefer grasses. Larvae will entirely disappear in an all-clover lawn.

Clover doesn’t require a special place for growing and it grows well in both sun and partial shade.

Clover doesn’t change the color (in yellow) when the dogs pee on it.

Mike Slater points out that the lawns are not stable natural habitats. They are actually a status symbol in Europe. He recommends planting native wildflowers, bushes, and trees around a plot of clover on the edges of the property line.

He, also suggests for many people to do it in their yards, and then they could serve as corridors for wildlife to move back and forth between parks and other natural areas nearby.