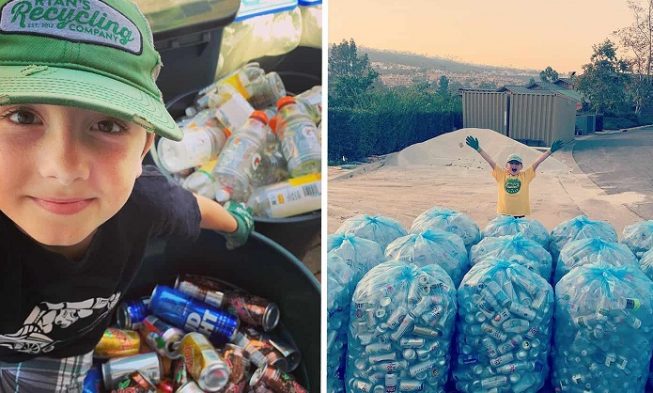 All of us are familiar with the sustainability mantra: reuse, reduce and recycle.

The problem is, that most of us are not really interested in following through, but there are people who can’t imagine not following this simple concept. People must be aware that every single thing they do, regarding the conservation of the environment matters.

Ryan Hickman, is a kid from Orange County, CA and he stands for a perfect example for what people should do if they care about the environment. One day, when accompanying his father on his daily trips to the local recycling center, he fell in love with recycling and came up with the idea of creating one such company of his own.

He was so passionate about it, and even though many people around him didn’t believe that he would actually succeed in establishing his own recycling company, he did it.

Moved by his passion about saving the planet, he started working on his idea seriously. He was only three years old when in 2012 he first came across the idea of creating his own recycling company.

At the beginning, he started providing empty plastic bags for his neighbors, so that they’d save their cans, bottles and some other recyclable materials for him. After that, he involved his friends, family and his parents’ coworkers. Now, Ryan’s company has customers all over Orange County and it’s most certainly doing better than ever.

It takes him about a portion of each week to sort through cans and bottles he got from the customers, so as to get them ready for the recycling center.

Now, he is an 11-year-old boy who’s the CEO of his own company, the manager and the major employee. He states that in an eight-year period of time, he’s recycled over 1 million cans and bottles. He finds inspiration to continue working because he knows that his actions help the environment to stay clean.

And by recycling cans and bottles, he keeps those materials from ending up in the ocean. On top of that, the money he’s earned so far are all going for his college education, and by the age of seven he managed to raise over $10,000.