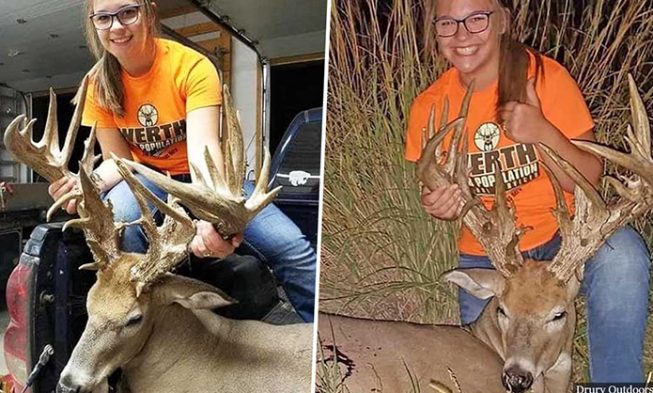 Paslie Werth is a 14-year-old Kansas girl who had the shot of a lifetime. She shot an impressive buck, on September 6, just one day after the youth deer season for this year was opened.

That day she went rifle hunting with her dad Kurt, having absolutely no idea that she was about to set a world record in hunting. Since there is a mandatory 60-day drying period before they can officially measure the rack, the record was just recently certified.

When the original shot took place, an unofficial green score of 282 6/8 inches was given. And it showed 44 points on the antlers.

How did she feel after this impressive shot?

The young hunter couldn’t believe her ears when she heard about the score. She said that neither one of them thought that it would be such a great hunt. The whole event was kind of surprising for her. However, after the drying period, she got the official score. It was 271 4/8 inches and 42 points.

The record holder informs that the buck was taken down on the family’s land. But that was not the first time they spotted it. It was first her sister who did notice it like three years ago. Then her father saw it, but couldn’t do anything at the moment. And finally, as she says, it felt like that was the right time.

Werth explains that on Sunday they didn’t come across any deer. But later that evening, they saw it standing right there, just 25 yards away. She knew that it was her shot. However, when she finally got him, she couldn’t believe it. The teen was more than happy to be able to share that moment with her dad. She explains it as the best moment of it. She seems to be enjoying the experience itself more, rather than the record alone.

Jamie Remmers was the former holder of the record. He’s been holding it for more than 20 years. His hunt happened in 1997, in Marion County. That buck was officially measured 257 1/8 inches.

The bunk Werth got, is the largest non-typical whitetail. So she’s been the first female to stand behind such a success and her dad claimed to be very proud of his daughter’s achievement.

A two-day firearm hunt this…