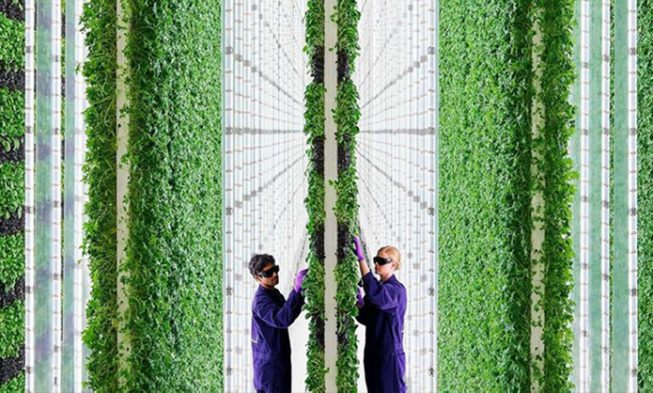 Almost 70 % of Earth’s population will live in cities in just 30 years. So, the question that arises logically is how are we going to be able to produce enough food to feed a population that is becoming increasingly more focused?

The answer is: Vertical farming. This innovative idea seems to be a vital method without the huge carbon footprint that comes with transporting food from far-away farms to feed these dense areas.

First appearing in San Francisco and co-founded by Nate Storey, the company that goes by the name ‘Plenty’ is an ag-tech company that is reinventing the way farms operate.

Storey is the chief science officer of the company too. He claims that farms are destined to become vertical and located indoors. That way, the food can grow anywhere in the world, year-round, and scientists and companies will constantly use robots and AI to make sure the quality of growth for the veggies, herbs, and fruits is at its very best.

All these things are part of the farming plan of Plenty. Their plan also use 95 percent less water and 99 percent less land.

Despite having a poor reputation for lack of education in much of popular culture over the last few decades, farmers too have been going technical.

They have been constructing houses, repairing tractors, as well as innovating new instruments to improve farming and make their lives easier. The world of “flat farming” has recently got enriched with drones and robots too.

If you talk to a person that comes from a country in which they have limited food security, then they’d tell you that they have to import everything. That means that the value of the food they’re consuming is quite different than the food, for example, in the United States. Hence, the price would be different, too.

Technology also implies that vegetation can be produced without the use of pesticides, in addition to a strong increase in food production.

Locally grown food is another perk of vertical farming. As we said earlier, imported food is costly. Besides, fruits and veggies are not grown 1,000 miles or more from a town like farmers are doing right now, but they are rather grown in a nearby warehouse instead.

In other words, this means that we’ll be able to cut the transport miles. This is definitely going to be useful for lowering millions of tons of annual CO2 emissions, as well as consumers’ costs.