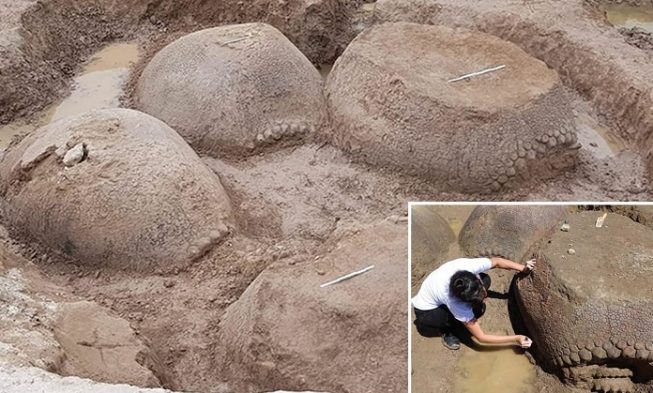 Armadillo is a species that’s very popular in Latin America. Out of all 20 subspecies of armadillos, only one exists outside Latin America and that’s the nine-banded armadillo which also lives in the U.S. They are closely related to sloths and anteaters.

The definition of the word ‘armadillo’ translates to ‘little armored one’ from Spanish. This word is given to this species because of the plates or shells that it has on its back, head, legs, and tail. Out of all living mammals, armadillos are the only ones that wear such ‘armor’.

Armadillos are known to have a shovel or pointy shaped snout and tiny eyes. Between all species, they have different sizes and colors. They can range between the 6-inch salmon-colored pink fairy armadillo to the 5 feet dark-brown giant armadillo. The other armadillo coloring can vary from red, black, gray, or yellow.

Even though many people believe all armadillos encase themselves in the shells, it’s false. Only three-banded armadillos can curl their head and back feet into the shell and form a hard ball that allows them to protect themselves from predators.

Typically, armadillos live in warm habitats that include grasslands, rain forests, and semi-deserts. They have a very low metabolic rate and cannot store fat as well as other species. Because of this, they cannot stand the cold. Additionally, they have very poor eyesight and usually use their smell for hunting. 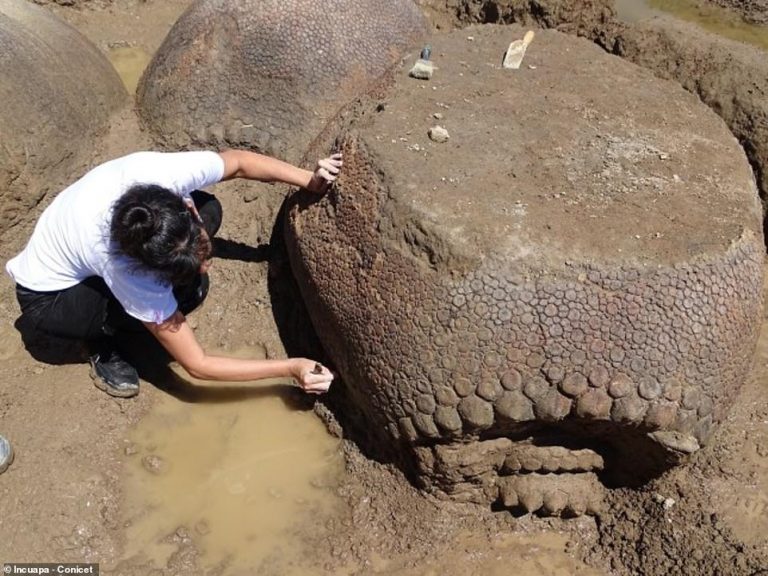 Most armadillo species dig up burrows and can sleep up to 16 hours per day. When they are awake, they search for ants, beetles, termites, and other insects to feed on.

Aside from insects, armadillos can also eat plants, some fruit, vertebrates, and sometimes even carrion meal. 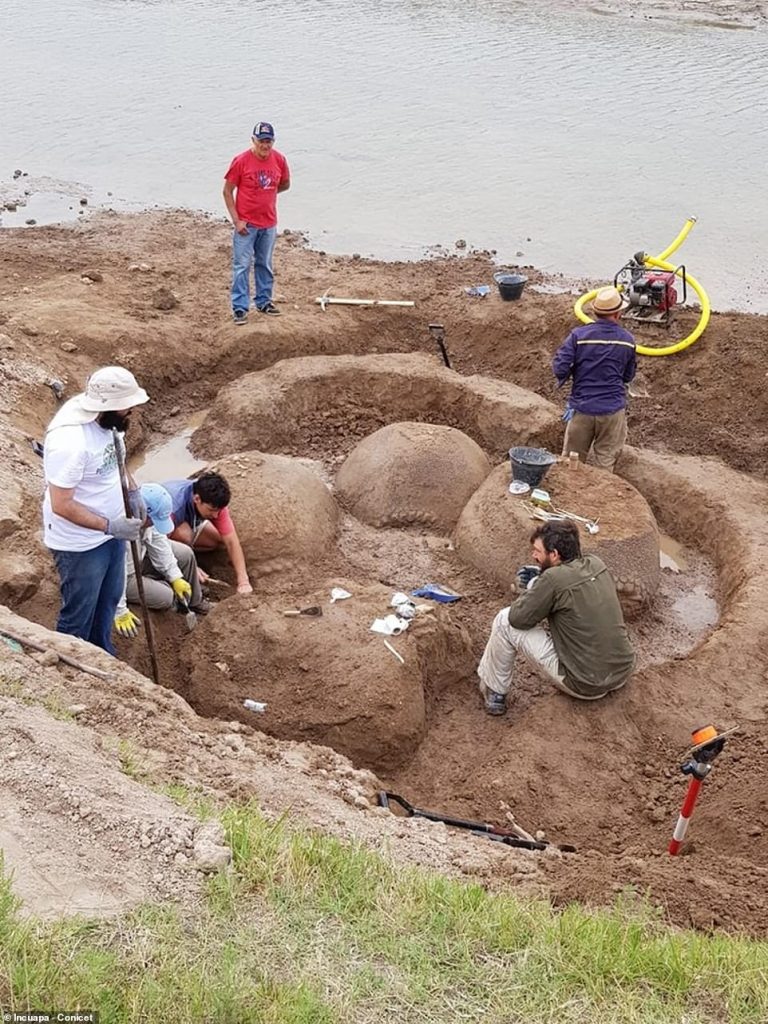 After taking his cows out to graze outside Buenos Aires, one farmer was able to discover something amazing. After seeing it the first time, the farmer thought he was looking at two giant turtle shells coming out of a dried riverbed. 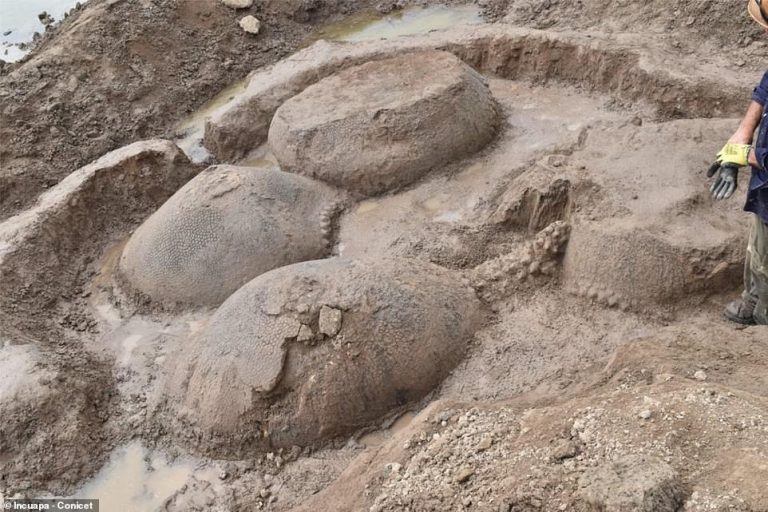 The area was later excavated and archaeologists found four giant fossilized shells. The largest one of the shells was as large as a Volkswagen Beetle. 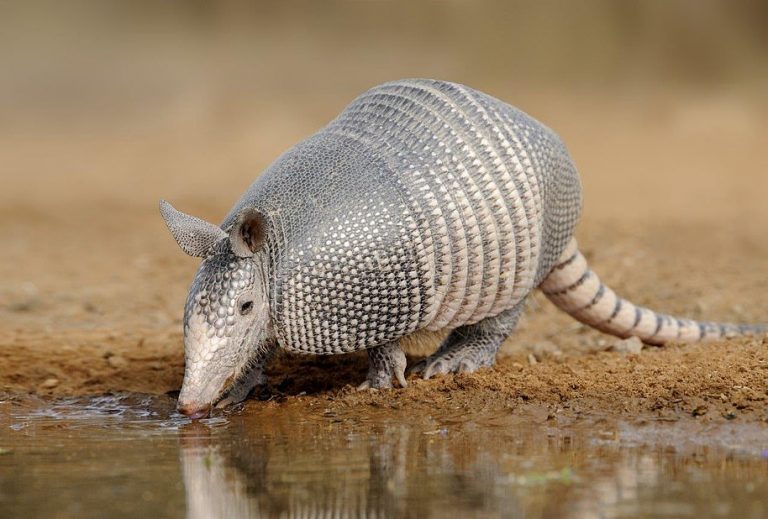 These shells belonged to glyptodonts which are the ancient ancestors of armadillos. Glyptodonts lived across South and North America during the Pleistocene epoch. They were wiped out during the last Ice Age which was around 10,000 years ago.

The four discovered shells belonged to two adults and two smaller animals. The archaeologists thought that they were only looking for two glyptodonts at first. Additionally, after discovering the shells, they observed them and saw that the animals were all facing the same direction, almost as if they were walking towards something. 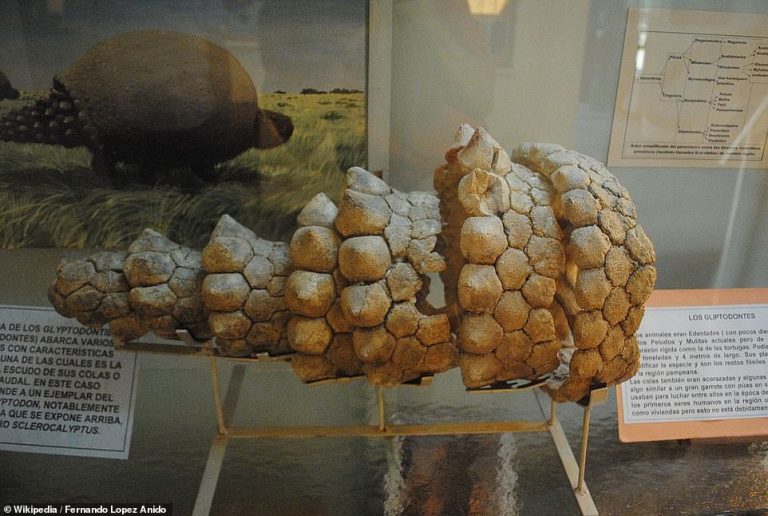 Usually, glyptodonts were covered with thick protective armor from head to tail. This armor was shaped like the shell of a turtle. Unlike the turtle shell, their one was with bony plates, similar to one of the armadillos.

Glyptodonts used their spiked tails as weapons and to defend themselves. Aside from being very strong and giant, the glyptodonts were herbivores. Their body shells were 5 feet long and 2 inches thick.