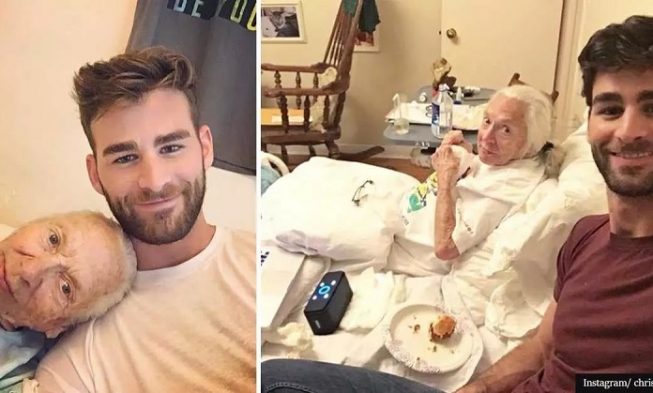 Do you know your neighbor well? Do you know them well enough to invite them to your home? What if you invited them to live with you?

In 2013, Chris Salvatore moved in in front of Norma Cook, an 85-year-old woman, and her cat Hermès. The two have always said hi when they see each other, but after Salvatore’s arrival they quickly became friends.

In the years that followed, the two grew closer and closer, talking every day and learning more and more about each other’s lives.

Unfortunately, with Norma’s age her health started to deteriorate and after a visit to the hospital the doctors said she needed 24/7 care. Chris spent more time to take care of her,  around the house, while making trips back and forth to the local store.

Chris, knowing Norma was struggling, even set up a GoFundMe page to pay Norma’s medical bills.

However, when he moved to another place, he realized he couldn’t leave Norma. In fact, they became such good friends that when Norma couldn’t live alone anymore and was in need of constant care, Salvatore, a 31-year-old actor, asked her to move in with him.

With no children or family nearby, she was all alone. “Her only option was for her to go to a facility,” he said for TODAY.

“I couldn’t do that to someone who’s like my grandmother.” “I am so happy I provided for her to live out her final days at home,” Salvatore told GoFundMe. “I can’t imagine how bad it’s to spend the last days of your life in a hospital without your friends or pets.”

This two turned out to be great roommates.

“We liked watching the news,” Cook said to TODAY. “We mainly talk and drink champagne and eat peanuts.”

Sadly, on February 15, 2017, Cook passed away. Salvatore shared the heartbreaking news on Instagram, where he usually shared the couple’s adventures. Salvatore said that Cook called him the grandson she never had.