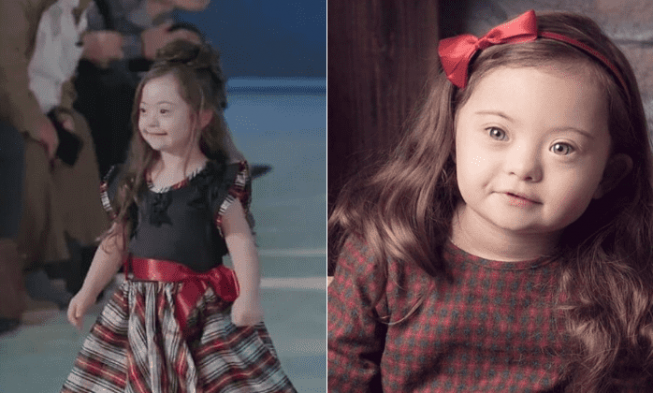 At only 4 years Francesca Rausi has a modeling career that any girl her age would wish to have. What is more amazing, Francesca has Down Syndrome.

Recently she appeared on a fashion show, which made her a star in an instant.

The fashion show she attended was Fashion Show Unici, held in Passarella, Malta. The word Unici is an Italian word which stands for “unique”. The show featured unique models, meaning they have developmental or physical disabilities.

Along with Rausi walked a 23-year-old professional catwalk model, Madeline Stuart, who also has Down Syndrome.

With her grey-blue eyes and expressive face, it is no wonder how she caught everyone’s attention. It’s easy to say that she lights up the mood everywhere she goes and melts everyone’s heart.

Her mother Michelle Rausi said: “I feel very emotional watching her because I see the happiness in her eyes. It’s out of this world.”

Little Rausi is not new to the modeling world, as she attended to e beauty pageant contestant when she was only an infant. She is also famous on Instagram account where you can find photos of her while modeling. Recently she competed in the Junior Miss Christmas pageant.

Rausi’s mother hopes she can spread awareness and open up possibilities for people with developmental and physical disabilities, as she told a British newspaper.

Let’s all hope Rausi’s success will be an eye-opener to most people. Not long ago, Ivy Kimble, another four-year-old with Down’s syndrome, was called to appear in the American Girl clothing catalog.

She might be right. Recently, another four-year-old with Down’s syndrome, Ivy Kimble, was hired to appear in the American Girl clothing catalog.