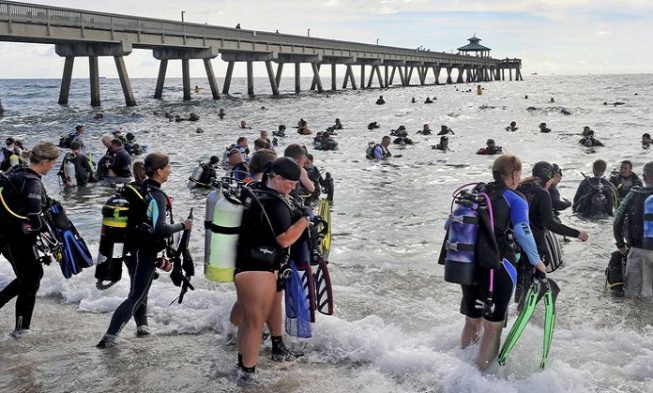 There are more than 50,000 Guinness World Records recognized in different areas. One of the records was broken recently when 633 scuba divers scooped up trash from the ocean floor near the Deerfield Beach International Fishing Pier.

Divers, who volunteered in that unusual human activity, pulled 1.5 tons of garbage off the ocean floor. This achievement is not significant because of the record but also sent a message to all who don’t care about the cleaned environment. Having cleanup efforts like this all over the world will be the real behavior of the people who are paying attention to live in clean areas!

The waters around Deerfield Beach International Fishing Pier were polluted before this activity was done. However, for only two hours spent scouring the ocean floor for garbage, 633 divers pulled off 3200 pounds of it. According to diver RJ Harper from the South Florida Sun-Sentinel, there were around 1,600 pounds of lead fishing weights and 60 pounds of fishing line.

Harper said: “All those times the line gets caught, you just never really think about it. Trash was collected, but the beauty of it is with 633 divers, we were able to do a very thorough cleaning.” He added: “I have 600 new friends just as a result of this.”

The annual cleanup of this beach was organized 14th times earlier, but this one is famous by the set of the Guinness World Record. The last year’s annual cleanup removed more than 1,400 pounds (1,000 pounds of lead weights, 104 pounds of metal, 161 pounds of fishing line, 52 pounds of wood, and 102 pounds of miscellaneous debris).

The previous record in attendance of the divers in an underwater cleanup was in 2015, held by Ahmed Gabr, a former Egyptian Army scuba diver, with a team of 614 divers in the Red Sea in Egypt.

This event was commented by many experts in this area, including Empric who said: “It doesn’t matter what happens today with the Guinness World Records. What really matters is that everyone is out there cleaning up around the pier and trying to improve the community.”