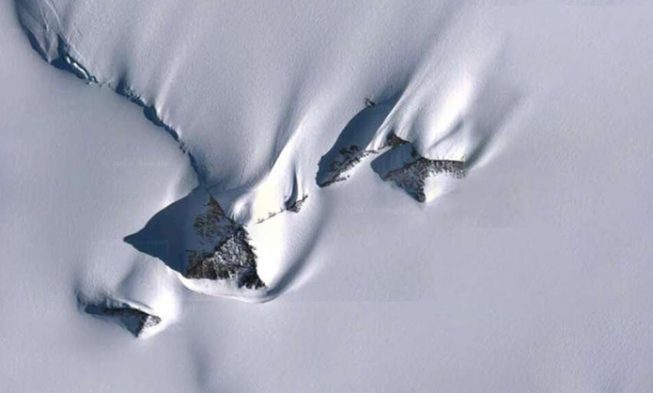 In 2011, a strange fossil that looked like a deflated football was found in Antarctica by Chilean scientists. The peculiar object remained unlabeled and uninspected in the collections of the National Museum of Natural History of Chile. It stayed there for almost a decade. The scientists, not knowing what it was, called it ‘The Thing’. This was a nickname inspired by the sci-fi movie with the same name.

Eventually, the fossil was confirmed as the first fossil egg discovered in the Antarctic. It was laid by an extinct giant sea lizard. They think this lizard has previously given birth to live offspring. It’s called a ‘mosasaur’.

How did they find this out?

Giant marine reptiles from the Cretaceous were historically thought not to have laid eggs, which is why there was a huge misunderstanding for such a long time.

However, using microscopes to establish that the fossil was an egg, researchers pierced through the several layers of the egg’s membrane.

This particular thin-shelled egg, second only to the elephant bird’s egg, is among the largest to have ever been described. Its anatomy is similar to the eggs of the most lizards and snakes that existed back at the time.

As for size, the reptile the egg belongs to would have been more than 20 feet long. And that’s not counting the tail, from the tip of its snout to the end of its neck. Hence, an ancient marine reptile corresponds perfectly for both scale and living reptile relationships.

The paper does not address how the eggs could have been laid by the old reptile. But there are two contrasting theories from the researchers.

The first idea includes egg hatching in the open water. Some snake species give birth this way.

The second idea includes the reptile laying the eggs on a beach. Afterward, the hatchlings would scuttle into the ocean, similarly to baby sea turtles.