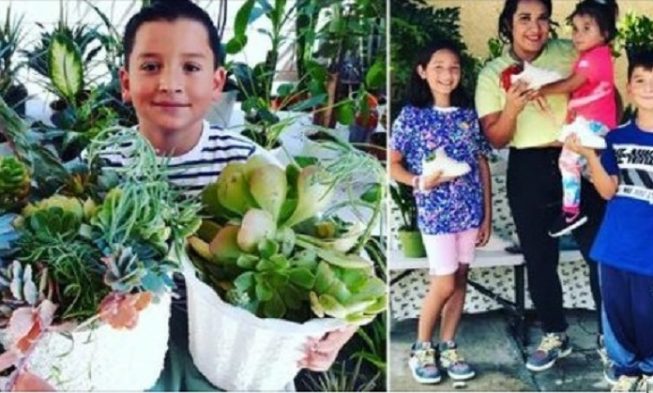 His family had the last 12 dollars and lived in a shed. Aaron Moreno took matters into his own hands, only at the age of eight, and found his plant business- Aaron’s Garden. He was able to help his family reunite and move into an apartment.

The pandemic has been difficult for many families, and millions of people are out of work and struggling to keep food on the table and a roof over their heads.

One Californian family was in difficult situation. They were down to the last $ 12, and they didn’t know who to turn to or what would happen next. But now they have both a new car and a new home, and they have an eight-year-old hero to thank for their turnaround!

Moreno has shown that when you want something, you can do it, regardless of age. As his business blossomed, he managed to move his family out of the small tool shed they lived in. ” The place was so small, it only had space for single bed,” said Aarón’s mother, Berenice Pacheco. “I wanted comfortable house, a car for my mom and my sister from Mexico to be with us,” Moreno said.

He then started buying plants in downtown Los Angeles to resell them. Determined to provide for his family, he embarks on a difficult mission. “It was worth it,” said Pacheco, who says it was difficult to carry things on the bus.

The business, like the goal, started small. Aaron in the start had eight small plants.

But the business steadily improved. Then he made good amount of money, as well as the $ 31,000 raised by GoFundMe.

Aaron’s Garden is growing and has thousands of followers on Instagram.

The family is converting their new garage into Aaron’s permanent store, where he will be able to sell more plants than ever before.

Aaron has big goals. He wrote on Instagram: “My next job after having my own plant store, is going to be in Nike. I want to make my own shoes. Then I plan to go to college and be a judge.”

We love to see how dedicate is Aaron to his family, and his business. We wish them well with Aaron’s Garden.