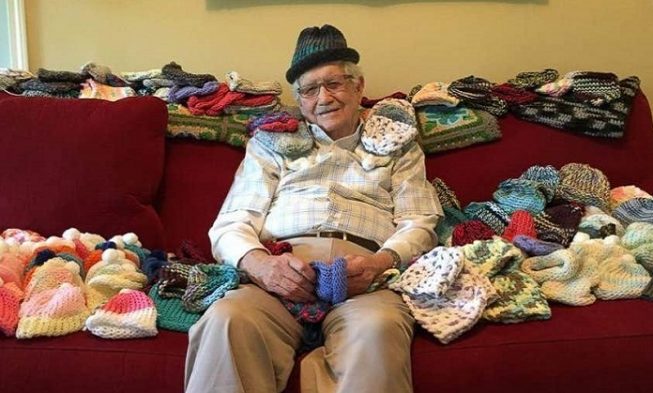 Sharing heartwarming stories is a useful strategy for improving people’s positive attitude to achieve something that is not far from their abilities, and at the same time can be very useful for a particular category of their community or the community as a whole.

An 86-year-old, retired engineer Ed Moseley, taught himself to knit, so he could make dozens of woolly hats, which he has been donating for premature babies at an Atlanta hospital. Atlanta’s Northside Hospital is known by delivering more babies than any other hospital in the US, but it is specialized for many other medical treatments. In that hospital Ed Moseley had been undergoing chemotherapy.

Ed Moseley is a resident of the Dogwood Forest, assisted living facility in Acworth, Georgia, which several months ago, set its residents the challenge of knitting hats for infants born early. This challenge was an inspiration for Ed, who didn’t know how to knit, but for reasons of his own, he felt compelled to take part.

Ed immediately asked his daughter to buy him basic knitting equipment and instructions. She gladly accepted it and got him a knitting set, a yarn, and a set of instructions. Ed slowly started himself and learned that he needed patience only.

In addition to knitting instruction, Mr. Moseley began watching TV shows on knitting and rehearsed to complete the hat in about an hour. When he mastered this, he offered to teach his roommates and living facility staff how to make hats. The result of this initiative was 300 knit hats, of which Mr. Moseley himself made 55. They donated them to Atlanta’s Northside Hospital.

According to the statement given to ABC News by Doug Bunt, whose newborn son Matthew was born prematurely recently, it is “really nice to know” that someone is “thinking about the well-being of these babies… The fact this man is taking time out of his day to help the kids really means a lot to us.”

This Ed’s achievement has even been the inspiration for the children at the school where his granddaughter teaches to learn knitting.

But he hasn’t stopped doing hats and caps yet. He is now making caps for family and friends, whose interest is raising on a daily basis.

This story can be an inspiration for everyone who wants to develop a strategy on how to accomplish personal goals.  Here are some inspiring words that can be very useful and helpful in that purpose:

“It is never too late to be what you might have been.” – George Eliot

“20 years from now you will be disappointed by the things you didn’t do than by the ones you did. So throw off the bowlines. Sail away from the safe harbor. Catch the trade winds in your sails. Explore. Dream. Discover” – Mark Twain