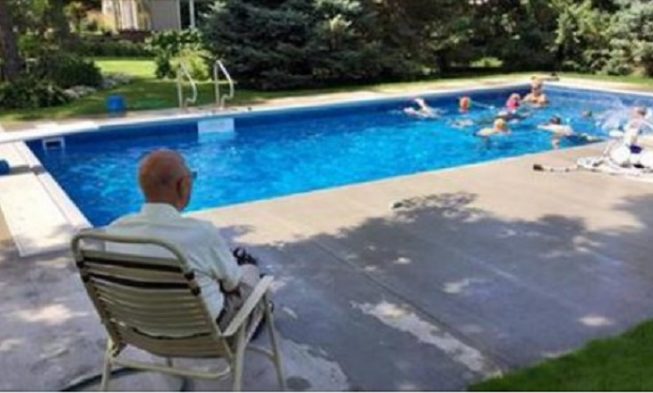 Grief and loneliness often go hand-in-hand. This is what, then 94-year-old Keith Davison of Morris, Minnesota experienced after his wife died of cancer in 2016. After 66 years of marriage and raising three children, his house was suddenly very quiet. That’s when, in 2017, he got the idea to install a pool for the neighborhood kids. Now every summer, his backyard is full, and at 98 years of age, he’s still going strong.

Keith has always been an avid swimmer. Installing a pool in their backyard was something he and his late wife Evy talked about doing for years, but never got around to it. When she passed away, he was very lonely. One day, he had the idea of finally installing that pool he and Evy had always talked about. Only this wasn’t just for him – it would be a pool for the neighborhood kids, too. He talked to some neighborhood kids who were unsurprisingly all for the idea.

“They were so excited about it, because they knew I’d let them in, and I decided, ‘That’s enough incentive right there.’ ” he said.

The Neighbors Couldn’t Believe He Actually Did It

In 2017, Keith installed a 32 by 9-foot heated pool in his backyard complete with a shallow end, deep end, and diving board. His neighbors, who knew about the idea, were shocked that he would go to such an expense. After all, he charges no admission – he simply wanted a pool because there wasn’t one for the kids in their community.

“I was just thinking, it’s fun to talk, but at the age of 94 would you really do it?” said neighbor Jessica Heubner when he talked about the pool. When construction began, she couldn’t believe it. “That’s when it really sank in. I was like, wow. You just don’t have that in today’s society, that amount of kindness.”

More Than Just A Pool

Putting in this pool for the neighborhood kids hasn’t just benefited the children. The adults are also seeing the impact. For Keith, his daily life is now filled with laughing children and socializing with the kids, their parents, and their grandparents. He has been able to connect with more people at 94 than he thought possible. He now knows nearly all of his neighbors personally.

The pool has really become a community hub in the summer months. It is a place where the kids can play together and the adults can socialize, as well. Everyone in the neighborhood has benefited from Keith’s generosity.

“As a neighborhood we’re getting out of our day-to-day routines to make the time to visit with each other and get to know each other,” she said. “(Keith) says it’s just a pool, but it’s not just a pool; it’s so much more than that.”

Of course, this is not a municipally-run pool. There are no employees and no lifeguards. As a former judge, however, Keith is very strict about safety. He has set out a list of rules to ensure everyone uses the pool safely.

Children under 12 are not allowed in the pool without a parent or grandparent present. There must be an adult present for anyone under the age of 18. Even for people over the age of 18, he says that he doesn’t allow people to swim by themselves. The only person he allows to break this rule is himself.

“I go in by myself,” he admitted with a chuckle. “If I had a heart attack and died in the pool, what a way to go. It certainly beats cancer.”

The expense of building and maintaining the pool doesn’t matter to Keith. He’s just happy to finally have a busy home again and that he can give back to his community.

Editor’s Note: This story is originally from 2017. At the time Keith Davison was 94-years-old, but you’ll be happy to know that 4 years later, at the age of 98, Keith is still hosting the neighborhood’s kids at his pool.