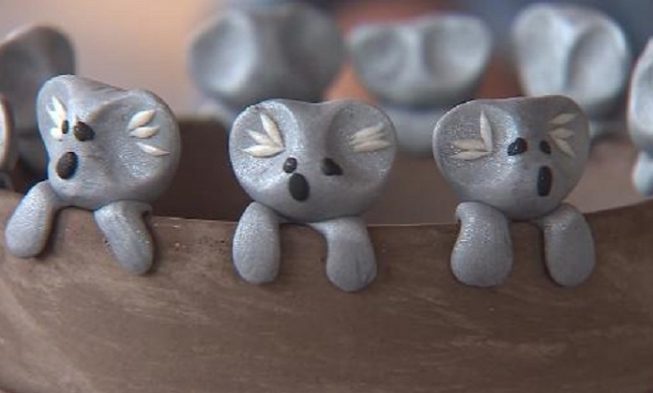 The fact that animals affected by fires in Australia really need help has reached out to all the children who adore them and care for them. Many, individually or with the help of their parents, help to overcome this disaster, but six-year-old Owen Colley does so in a special way, resolving to raise money to save them. He got the idea to make small clay koalas and sell them to donors, and to donate all the proceeds to help the animals.

He lives in Hingham, Massachusetts and when he learned that many animals were killed in the fires, he took up this donation action.

Firstly he drew a picture of a kangaroo, a koala and a dingo in the rain, which represented his wish for Australia, a wish for rain and wildfire relief. Then his parents asked him if he wanted to help and they together came up with this idea of making some clay koalas and giving them in response to donations from friends and family.

While Owen was making little gray koalas out of clay, his parents set up a way for people to donate to Wildlife Rescue South Coast, a wildlife rescue group in New South Wales. Every person who donated $50 or more to that fund received one of Owen’s koalas.

In just a week Owen raised more than $20,000 for the rescue group, and on January 21, it raises to $257,356. The family launched a GoFundMe campaign, so everyone can donate by clicking here https://www.gofundme.com/f/owen039s-australian-creature-rescue.

According to ecologists at the University of Sydney, nearly half a billion animals have been affected by the fires in NSW alone and millions of them are potentially deadly. In the bushfires were affected birds, reptiles and mammals, except bats, but insects and frogs aren’t included in that number.

Sharing his idea to help animals Owen wanted people to know more about Australia. He said:

This boy knows a lot of animals from Australia, such as the Tasmanian devil, the kangaroo, the womb, the kookaburra and the koala, and is ready to list them.

Owen has a connection with Australia because his father Simon grew up in the suburbs of Sydney, and he even lived there for a few months when he was a child. This fact that he lived there makes him proud, points out his mom, Caitlin Colley.

She adds that Owen often talks about Australia, which he misses and wants to get back there, so this fire situation has disappointed him a lot.

Making each koala with 6-year-old hands

Creating clay creations has become a real pleasure for Owen, but it must also be emphasized that he has a knack for handiwork. A sketch of a koala, an Australian animal icon was made by his mom and everything else was done together.

It takes 3 or 4 minutes to make each koala. He uses silver Sculpey clay to make the head and body of a koala, and with white clay, it adds expression to her fluttering ears, while black clay forms the face of the animal.

When the koalas are formed of clay, they are baked in the oven at 275 degrees for about 17 minutes. The so-called Owen clay koalas became popular so he had to do more because of demand and now his problem is that he has run out of clay.

His mom bought all the Sculpey flex she could find within 20 miles.

Due to a large number of donors, they are concerned that they cannot reciprocate sending the clay koala.Donors send $ 5 to $ 150 to $ 150, and in the US only, koalas are shipped, and transportation costs are covered by Owen’s parents.

Because Owen’s desire is to help as many organizations and animals across Australia as possible, his parents are looking for ways to do this.

They explain the internet campaign in a way that everyone can understand. For example, every $ 25 raised helped feed joey (a young kangaroo) for a month.

The Colley family believes that this example will be followed by other parents and, along with their children, find ways to help anyone affected by the fires.

They point out that everyone can help at least a little, and when there are more small things, it will make an even bigger difference.