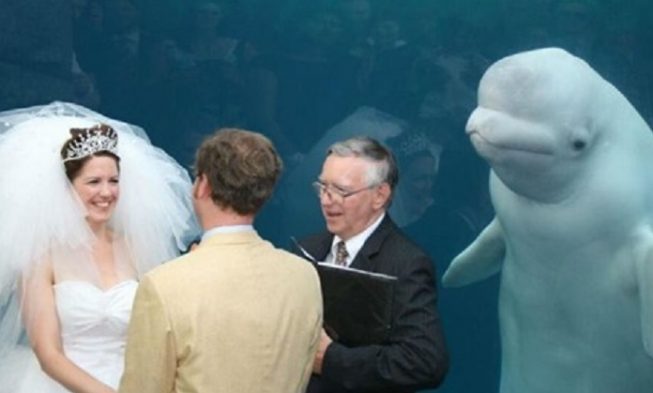 Everyone in the world knows what a photobomb is. They are universal and require no origin, language, age, or culture. They are one of the most typical comical things that can be done with a photo.

Photobombs feature either some person or usually an animal. Because the animal has no idea what they’re doing or that there’s a picture being taken, they can interfere with a picture such as the ones below.

What makes photobombs more hilarious is the addition of editing on Photoshop which makes them perfect.

The photobomb that’s posted on this article is from a Beluga Whale that decided to appear on the photo of a newly wedded couple at the moment that they both were taking their vows.

The couple was getting married at an aquarium in Mystic, Connecticut and during the process of taking their vows, the curious animal swam in its tank to see why so many people gathered at one place. It almost upstaged the bride on her best day of her life.

The photos taken of the couple with the adorable creature are the best and funniest pictures that have ever been taken.

People have found it funny that the whale looks very interested and almost as if it’s part of the entire ceremony.

Many experts in Photoshop took it upon themselves to make this photo even better and started creating amazing edits which reached more than millions of views on Imgur.