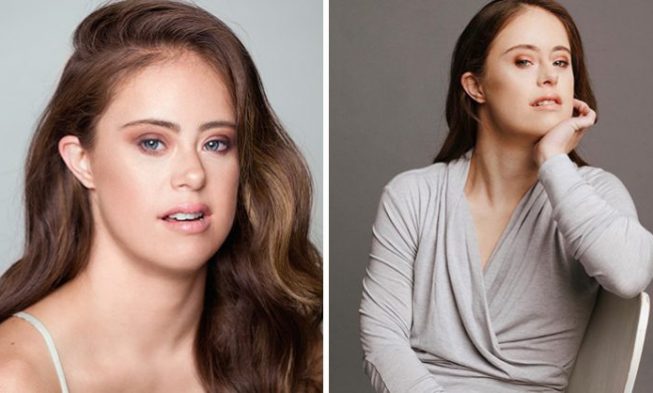 Everyone in the world has their own inner and outer beauty. Unfortunately, not everyone can see how different people are beautiful in their own way. Nowadays, beauty standards are becoming very strict. Social media delivers us “perfection”, while we live in an imperfect world.

But it only takes one person to break the wall. Chelsea Werner is a gymnast from Danville, California and even though she has Down Syndrom, she successfully started modeling. Like any other person out there, she has her own qualities and charm. Down Syndrome, or also known as trisomy 21, is a chromosomal defect that is associated with mild to moderate intellectual disability, physical growth delays, and characteristic facial features.

While participating in the Special Olympics United States National Championship as a gymnast, Chelsea Werner became popular. She won this competition four times. Gymnastics has a very special meaning to her from the beginning.

Because she had to exercise when she was younger, she started gymnastics when she was only 4-years-old. After practicing for a while, she became the champion gymnast. Gymnastics made her what she is today, and apart from all the benefits exercising gave her, she became more confident.

Her dreams finally came true, and on top of everything, she had the full support from her family. If she hadn’t such a loveable family, she wouldn’t even make it to the fashion industry. Every model agency that she tried to contact rejected her, by explaining that they do not engage models with Down Syndrome. Despite her rejections, she never gave up and her

Being confident and wanting to succeed, she caught her dream. A company called We Speak saw Chelsea on social media and wanted to take her as a model. We Speak is an agency that encourages body positivity and inclusion for any different people. Till recently, the modeling world didn’t have the ear for the people with disabilities, especially people with Down Syndrome.

Because of that, Chelsea wanted to change the way people look at Down Syndrome. After a viral video with Chelsea spread on social media, Briauna Mariah, the founder of We Speak, contacted her and wanted her to be part of the modeling world.

She finally won what she fought for, and as soon as she did her first photo-shoot, she became a star. Chelsea was recognized and admired everywhere, especially on social media. She even gave hope to parents who have children with Down Syndrome. Being beautiful inside and out, Chelsea broke the stigma for people with this condition and proved everyone that Down Syndrome shouldn’t be a barrier. If they work hard enough, they can achieve everything they want.

Briauna Mariah said that Chelsea fits perfectly in the fashion world, and she is a great person to work with. She can cope with every comment someone gives to her, and without being narrow-minded, she learns new things quickly.

Mariah encourages Chelsea to continue doing what she does. The modeling agency is in the progress of making her a brand and preparing Chelsea to feel confident while shooting. In the future, she will win many peoples’ hearts with her appearance.

Maran Avila and Madeline Stuart are also models with Down Syndrome that work together with Mariah. By working as a model for many years, Stuart launched her clothing line that goes by the name of “21 Reasons Why”, indicating the extra 21st chromosome. These three models proved once again that perfection doesn’t exist, and we are all beautiful and unique in our way.

People should start appreciating differences more, and by that, they should be able to see the beauty of people with disabilities. Mariah proved everyone that nothing is impossible, by following her dream and being fearless. We learn from this kind of people that beauty standards are strict, but not immutable. In the end, we all have different abilities that should be praised.