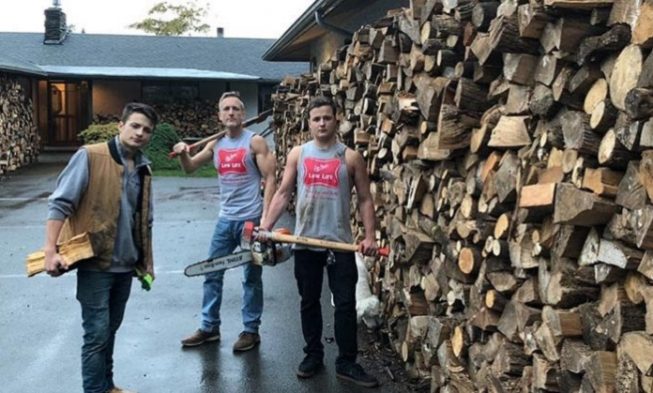 The statistics of the U.S. Energy Information Administration show that in 2015 about 12.5 million (11% of all U.S households), used wood as an energy source. Almost 3.5 million of those households in rural areas used wood as the main heating fuel.

Because the financial situation of many families, who used woods as a source of heating was not so good, they couldn’t afford themselves to purchase them for heat. However, their neighbors decided to do something to help sourcing wood for all families in need.

The initiator of this charity activity was Shane McDaniel, a single father-of-six who lives with his family in Lake Stevens, Washington. Living with his large family, he completely understood how difficult it is fairly sharing the budget constraints. Because of that, McDaniel and his twin sons, Henry and Harrison, spent several months chopping up and seasoning 40 cords of their own wood. In the end, they had enough pieces to fill up about 80 pick-up trucks, which were ready for the delivery to the families in need.

Shane, a 47-year-old man logged into his Facebook account to make the special announcement, offering wood to the families. Uploading photos of himself and his boys standing together with saws and axes, surrounded by countless, high-rising, piles of wood, he posted:

“IF YOU ARE IN NEED OF FIREWOOD AND CANNOT AFFORD IT, PLEASE PM ME! No one goes cold in our hood this holiday season.”

He also has pleaded people who had spare wood to donate and to help keep their neighborhood warm as the frigid winter temperatures were approaching. After the first big freeze they had, he wrote to his friends to tell anybody who needs wood to warm a cold house this holiday season, especially someone elderly or with small children in the house.

The wood was to be given free of charge in a selfless display of true common spirit. The McDaniel family did not expect many requests to be sent via Facebook, and within a few days, it went viral, with people in its community and beyond.

McDaniel received messages from all over the world, to which people sent him respect for his incredible service to humanity. Individuals asked to volunteer and help cut wood, but there were marriage proposals for handsome McDaniels as well.

They started splitting firewood in November and that lasted all winter. Their goal was people who genuinely couldn’t afford to get enough wood for the cold season.

Bonding over kindness and good values

For the Washington Post, Shane’s sons acknowledged that the wood splitting exercise was not easy, but gave them the opportunity to connect. The same thing happened with Shane’s father, they also bonded over wood splitting, so now 21-year-olds have become part of that tradition.

Delivering free firewood, the boys faced all sorts of reactions. Most benefactors were grateful, not even trying to hold back the tears. Many hugged and kissed them in gratitude. However, according to the boys, some even reacted hostile, which simply was not in them, but they were angry with the world and crazy that they had to ask for help. Some would just say thank you … put them there, and then they would go back to their house without saying a word again. All of these reactions were calmly received by the donors because according to the donation is only a reward and it has nothing to do with how well it is received, but how much is needed.

Abby Valentine, 42, a disabled woman who depends on disability pensions to keep her home, worried that her young children might get sick from sleeping in their cold home. Her life has become much more difficult since her first child died in a drunk driver accident in April 2018. The difficult financial situation did not allow her to pay for wood because she had to pay other bills.

With the wood she got for her fireplace, she was able to reduce bills for using electricity as a heat source. She stated:

“I try to save as much as I can, but if my home is too cold, I have to use it because I don’t want my kids to get sick.”

They had a lot of requests for wood, so they had to ask for donations from other people in the community. Shane set up a local station in his craft beer and recruited his manager to respond to messages.

With more volunteers able to help with the daunting cleavage task, Shane plans to hit a larger number this year, targeting a minimum of 100 wood strips. This amount of timber should be sufficient for homes in need of distribution around Stevens Lake.

According to many people who have heard about that initiative, Shane McDaniel deserves to be honored with a Key to the City. He believes that his reward lies in the smiles, hugs, and joy from the people he lends a much-needed hand.

“I had no intention of doing this every year. But read through my messages, and you’ll understand.”

The world needs more people like Shane and his boys.