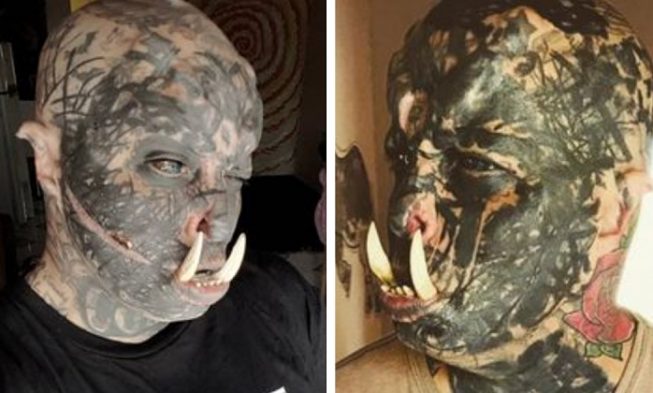 A man who is really into body modification has spent great amount of money so as to have some real tusks fitted to his teeth.

This man, who quite accordingly calls himself Orc, has devoted his life to tattooing about 80 percent of his body, and now he has even spent about £400 to have two enormous, pointy teeth added to his own.

This 41-year-old man comes from the small town of Iguatemi, which is on the border between Paraguay and Brazil, and he says that he was only 15 years old when he got his first tattoo.

Then at the age of 35 he moved into body modification and plans to continue doing so in the future. 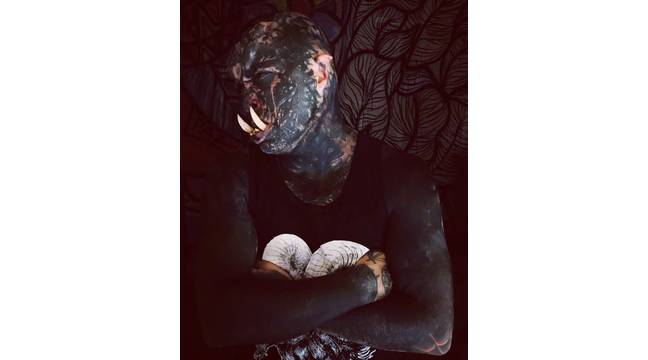 Orc has many piercings placed beneath his skin, or else called subdermal piercings, tattooed eyeballs and a split tongue as well.

He doesn’t agree with the fact that many people find him weird and according to him, he’s only being himself, which as a matter of fact is all anybody can do.

He states that these body modifications are his ideas and the inspirations for them he finds in his heart. He says that he’s just trying to be himself.

Orc asserts that he is not inspired by anyone.

Unsurprisingly enough, Orc once said that he is paid a bit of attention for his quite unique look.

Nevertheless, no matter what you may think, most of the comments seem to be positive.

He even said that there are people who try to motivate him by telling him good things. Therefore, he says that bad comments do not affect him because as he puts it, there are bad people everywhere and they are always around, so he does not pay much attention to them.

He seems to be really proud of his style and the way he’s modified his look, but he said that his family and friends were not much supportive of some of his choices.

Orc added that he was raised in Campo Grande, by both of his parents and his mum was not fond of his look, which is not the case with his father, who tolerated it and when it comes to his friends, he said that they find it weird. 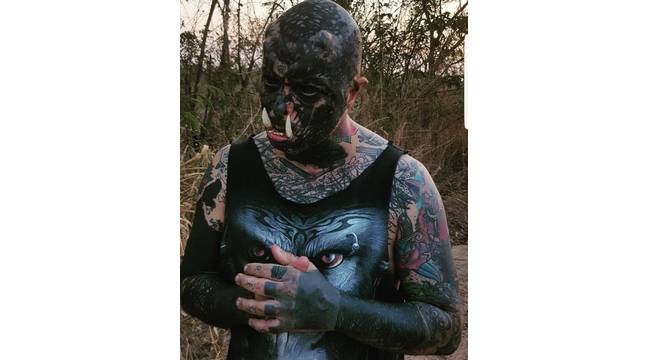 Anyways, he’s not going to be stopped from living his life the way he wants to by some disapproval here and there. He’s already had the work done, so he can’t turn back time, no matter what.

He doesn’t want to stop getting tattoos and body modifications, and he doesn’t seem to be interested in dealing with what other people might think about it.

When you think about it, it’s quite a positive attitude to have.

To conclude with, he said that what matters is to live, to be happy, to travel and love, basically do whatever you want because life goes by fast and death cannot be escaped.