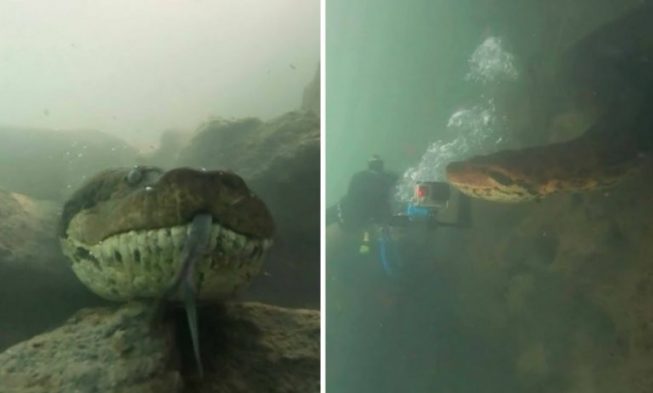 Anaconda snakes are huge and menacing snakes that are a real nightmare for many people worldwide.

They are not toxic, but the fact that they can stay underwater and swim with their bodies submerged and their heads above murky water leaves everyone petrified.

Recently, two friends confronted this giant reptile face-to-face while diving in the Formoso River in Brazil,

A typical place of living for Anacondas are swamps and murky streams in South America, but it is not the case with Formoso River in Brazil, which has crystal clear waters, so these huge predators can be seen while people dive.

They hibernate to the end of July and can be seen later, which is time for all who want to observe these majestic creatures better while diving.

The temperature of the river water is 22-24 degrees year-round, and generally, during the wintertime, it is hotter than the air temperature. For that reason, anacondas spend more time in the water during winter.

Juca Ygarape and Bartolomeo Bove could meet this giant green anaconda, which weighs around 90 Kgs and measures around 7m.

In the video, you can see how Bove, a professional shark diver, and underwater videographer followed the snake that lies in the river bed, and then when it sees the camera and inspects it, flicking with its tongue. On the footage is seen also how it swims away from a couple of the divers.

Bove claims that he misunderstood that anacondas are aggressive, which was not seen in the video. It actually offers an amazing opportunity to get to know the giant snake better.

“The rivers and the bodies of water around the Bonito area are the only places in South America here anacondas can be found in crystal clear waters, and therefore diving with them is possible.

As shown in the footage, the anaconda swims calm and peaceful completely indifferent to our presence. Sometimes she comes closer, curious about my camera, licking the lens.”

He also added that the behavior of the anaconda demystifies the myth that it is an aggressive and violent creature that can be dangerous for people’s lives.

These snakes move fast and kill their prey by narrowing their breathing, wrapping their powerful bodies around the prey.

They can open their jaws so that they can swallow prey much larger than themselves. Green anaconda reaches huge size by feeding on local wildlife, including wild boar, birds, capybara, turtles and sometimes jaguars.

Bove believes his video will capture the other side of the magnificent reptile. He described his experience as incredible:

“No words can justify the sensation I really felt during that experience.”