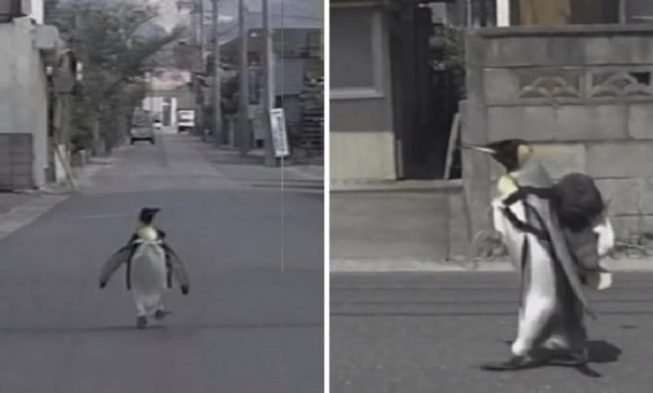 Penguins are absolutely adorable, but most of us don’t even consider them as pets.

However, one family in Japan had other ideas, and when the opportunity presented itself to rescue a pet penguin, they did. They named him Lala, and he’s probably the strangest pet we’ve ever seen. Real TV made a short documentary about Lala in 1996 and it was a lot of fun. He was about 10 years old.

You ask how he spent his days? Well he was living in an air- conditioned room and loved to wander his streets. Especially his favorite place in the city, of course the fish market. During his days, he left his air-conditioned room and ventured to the local fish market, with a backpack shaped like a penguin and enjoyed a mackerel snack.

Apparently, Lala was accidentally caught in a fishing net, so the family took him in and cared for him until he was healthy again. When he was released back into the wild, he kept returning to his family, so they decided to adopt him as a pet and give him a home. Although the conditions were unusual for a penguin, Lala seemed happy and at ease with them!

In a charming video shot in the 1990s, Lala walks from his home to the fish market alone to the delight of the local fishmonger. A neighbor then cools it down by spraying it with water from a garden hose. On the excursion, he was seen having a good time with the Nishimoto when they scratched under his chin.

Unfortunately, Lala passed away in 1998. His memory will always live on.