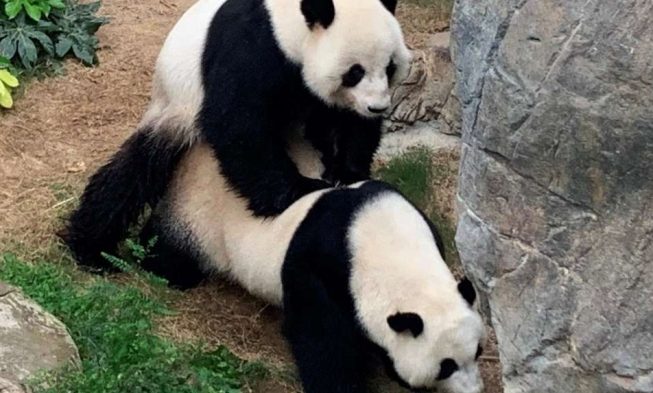 Ocean Park is an oceanarium, animal theme park, marine mammal park, and amusement park located in Hong Kong. Two giant pandas (Ailuropoda melanoleuca) at Ocean Park called Ying Ying and Le Le finally had a successful mating after 10 years that they’ve been together in the park.

The zoo announced that the pair were caught in action at 9 am on Monday, April 6th. Signs showed that they had entered their hormonal mating cycle in late March.

These two adorable animals were first brought to the zoo in 2011. Even though initial attempts to mate existed, they ended up in misfortunes and miscarriages.

Since the coronavirus outbreak, people couldn’t visit Ocean Park. This all began on January 26 after the epidemic went out of control and many places had to close down for visitors so people will stay safe from the virus. Fortunately for the animals, some self-isolation is exactly what sparked up their magic.

【🐼大熊貓盈盈和樂樂的好消息💕】經過多年嘅愛情長跑，盈盈同樂樂今日終於成功自然交配喇！今次係佢哋小倆口自9年前（2011年起）開始嘗試自然交配以來首次成功，公園嘅獸醫同護理團隊會繼續密切觀察佢哋嘅身體狀況同行為變化，希望會有熊貓「添丁」嘅好消息！大家留低❤️emoji，一齊祝福盈盈同樂樂可以早日迎接新家庭成員喇！ . . [🐼Good News from Giant Panda Ying Ying & Le Le💕] Ying Ying and her long-standing sweetheart Le Le succeeded in natural mating today! This is the first success since the cute couple began attempts at natural mating 9 years ago (from 2011). The Park’s veterinary and animal care teams have been closely monitoring the giant pandas’ body conditions and behavioural changes, hoping to bring wonderful pregnancy news to you all. Let’s leave a ❤️ emoji in the comment section to send your blessing to our lovable Ying Ying and Le Le! #hkoceanpark #OPLovelyAnimals #panda #海洋公園 #熊貓

Giant panda’s mating period can range between 72 to 324 days and luckily for this zoo, they could be announcing amazing news in the coming year. An ultrasound test will be made near the time of birth to confirm the pregnancy.

The Executive Director in Zoological Operations and Conservation at Ocean Park, Michael Boos said that the pandas are sexually mature when the male is seven and female five years old.

After Le Le and Ying Ying arrived at the zoo back in 2007, they have been trying to make a successful mate since 2010. Unluckily, they had not been able to until this year.

“The successful natural mating process today is extremely exciting for all of us, as the chance of pregnancy via natural mating is higher than by artificial insemination.”

If the mating is successful, results could be seen as early as late June. Signs of pregnancy and hormonal level fluctuation, as well as behavioral changes, take a while to show up. However, Michael added that “Ying Ying could experience a pseudo-pregnancy.”

He hopes that the news they receive about the pregnancy will be happy and that it will be amazing news for people from Hong Kong. He hopes that efforts for the conservation of the endangered animal will be increased.

The pandas are native to small parts of south and central China and due to captivity, they have difficulty breeding. This is not great news especially since the IUCN Red List changed them from vulnerable to the risk of extinction.

The reason why pandas cannot breed in captivity is that pandas have to be compatible and rely on a subtle range of communication which is easily bothered. Additionally, female pandas ovulate just once a year which can lead to pseudo-pregnancies.

This is still amazing news in dark times like these and social media made it their right that the news spread as quickly as possible.

Ocean Park says its resident giant pandas Ying Ying and Le Le have mated naturally for the first time since they started trying a decade ago.

What, once a decade?