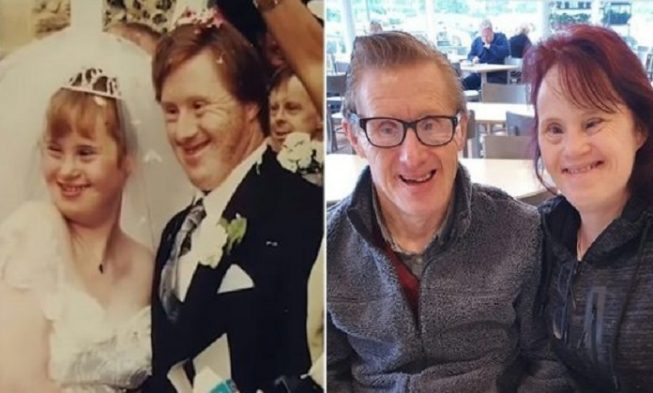 Marriages can sometimes be difficult to handle. Nowadays more and more famous married couples separate, leaving the rest of us wondering if there is true love to be found.

Up till this day, many people cannot understand how people with conditions such as Down’s Syndrome can live by themselves or start a family. This stigma persists, but there is always someone to beat it.

Two decades ago, Maryanne and Tommy Pilling decided to spend their lives together and find the happily ever after. They got married in an Essex church in the UK. The wider mass found this union odd, as they were the first couple with Down’s Syndrome in the UK to marry.

Their love was stronger than the criticism towards them. It was thought that their marriage won’t last very long because of their condition, and shouldn’t marry in the first place. Fortunately, they proved everyone wrong, as their love grew stronger every day. The couple celebrated their 22nd anniversary in 2017.

Before this couple got married, they dated for a year and a half. Maryanne and Tommy met in 1991 and they fell in love immediately. They became popular on social media for celebrating their 22 anniversary, and thousands of people were amazed to see them happy.

The couple interpreted their first wedding dance, in honor of their big day and to celebrate 22 years of marriage. Even though many people were attending their celebration, Maryanne and Tommy danced like no one’s watching.

“My wedding was the best day of my life. I was shocked when Tommy proposed but I didn’t have to think twice about saying yes,”  said Maryanne.

“Tommy and I never argue. I love my husband very much. He is my best friend,” she added.

The couple leaves in their own house, as they are independent and rely on each other. But if they need help, they can always call Maryanne’s sister, who lives with her family next door.

Maryanne and Tommy cut down the stigma and proved that it was a good idea to get married. They are happy and thankful for everyone that supported them in their biggest decision.  Therefore, Maryanne’s mom was their biggest supporter.

After Maryanne’s mom allowed the two of them to get married, many people disagreed with her. But she stood up and told them that it was their decision to make.

“Maryanne had dreamed about a big white wedding since she was a little girl and that’s exactly what she had. It was a beautiful day,” said Lindi Newman, Maryanne’s sister. She later explained to her mom’s decision.

Lindi Newman told that their relationship files everyone with positive energy.

“When they walk down the street holding hands they make a statement but in a good way. Some people stare, they assume people with Down’s Syndrome and learning difficulties can’t get married. But we also get so many lovely messages from people who are inspired by their story,” she added.

“People worried about their own children or grandchildren with Down’s Syndrome get hope from Maryanne and Tommy’s story, hope that their children can also fall in love and live happily ever after,” said Ms. Newman.

Maryanne’s sister made a Facebook page for the lovely couple and she manages it. Their feed is filled with photos of Maryanne and Tommy and how they spend their lives together. They share photos of them traveling in different places, such as museums and aquariums.

They melt a thousand people’s hearts, as they send good fortunate messages very often, wishing them a happy life.