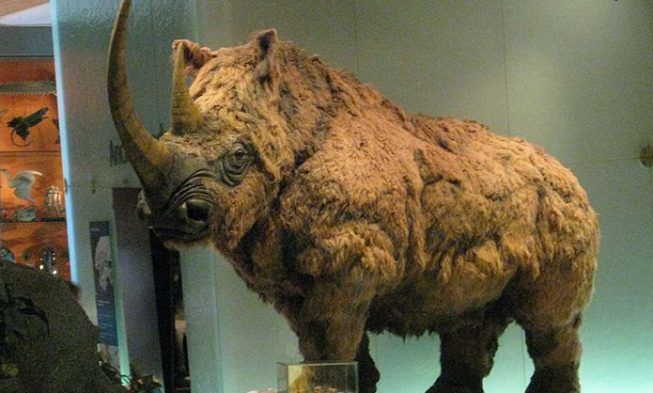 In the coldest part of Russia and its most extreme northern areas, there is an amazingly well-preserved Ice Age woolly rhino that has been found, with much of its internal organs still absolutely intact.

Russian media announced Wednesday that permafrost melting in Yakutia in August had exposed the carcass.

Scientists are waiting for ice roads to become passable in the Arctic area to deliver this jewel next month to a laboratory for studies.

The back of the carcass has soft tissues, probably the genitals and part of the intestine. This allows the excreta to be analyzed, enabling them to recreate the paleo-environment of that time.

They believe the rhino is juvenile. The age expectancy is maybe three or four years old. The time of death is probably between 20,000 and 50,000 years ago.

The carcass is amazingly preserved, and still retains some of its soft tissue, fur with a hazel color, teeth, intestines, lumps of fat, and even the horn they are recognizable for, since the bones have remained concealed and frozen for thousands of years.

The young rhino was about three or four years old, and when it died, it lived separately from its mother. It died most likely by drowning. The animal’s sex is still uncertain.

Scientists are waiting to define when it lived in the radiocarbon analyses. As of this moment, the most probable range is between 20,000 and 50,000 years ago.

The remains of this particular mysterious rhino were found in the surrounding area of where they also found the remains of Sasha, the world’s only baby woolly rhino ever found. Researchers discovered Sasha in 2014. She had striking strawberry blond fur and they estimated her to be 34,000 years old.

Russian researchers say this may be the best-preserved woolly rhino ever found: “There are soft tissues in the back of the carcass, possibly genitals and part of the intestine” https://t.co/LdVPrVSG6R

As for this moment, this particular relic of the Ice Age remains in Yakutia. They are waiting for people to develop ice roads and then they will be able to transport it to the capital Yakutsk for research.

Yakutia is well-known for these mysterious animal findings.

The permafrost is thawing, particularly during the summer months, due to the region’s warming. On one side, this is very bad for the environment, but on the other side, when it comes to revealing ancient beasts, it is a treasure trove.