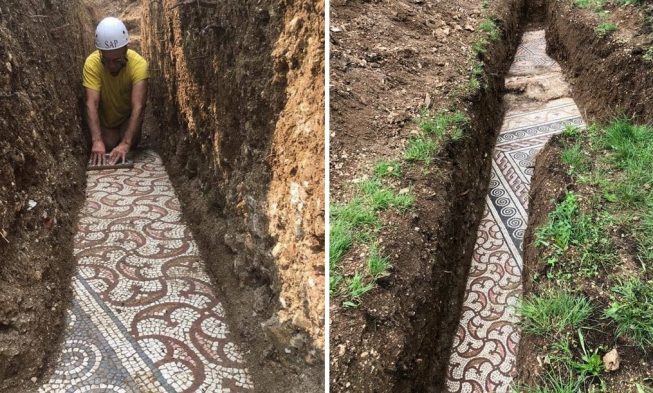 Throughout the existence of humanity, there have been ancient pieces of art scattered across the world. Whether its sculptures, buildings, or cave art, archaeologists have found some amazing ancient objects or drawings from humans.

One of the oldest pieces of prehistoric art are the Bhimbetka and Daraki-Chattan cupules which have been dated around 700,000 BC. These pieces were discovered in two ancient quartzite caves located in Madhya Pradesh, India.

Many different forms of art have been practiced by mankind throughout the prehistoric ages. Most of the preserved arts that we can find now are either cave arts or sculptures.

Mosaic is an art formed out of small pieces of stones, glass, or nature-based materials cut into squares or shaped using some kind of tools. These fragments are later arranged into pictures, patterns, or other designs that are held together using grout or another adhesive.

Many cultures across the world used this type of art. Some of the earliest known mosaics date from the Mesopotamian Era during the 3rd millennium BC. These mosaics were found in a Mesopotamian temple and were made from stones, ivory, and seashells.

Archaeologists think that these mosaics were the foundation for the mosaics made thousands of years later which can be found in the Roman Empire or Ancient Greece. Compared to the mosaics from the Mesopotamian Era, the artists that made the newer mosaics made patterns, pictures, and motifs in their form of art.

The Roman Empire was first established in 27 BCE following the fall of the Roman Republic. After a while, the Roman Empire consisted of almost the entire Europe, parts of Northern Africa, and small parts of Western Asia.

Some of the first Roman mosaics are dating to the late Republican period about 2nd century BC.

As we all know, Italy was part of the Roman Empire, and digging in places in Italy you’re bound to find some sort of ancient building or art.

After an excavation on a privately own vineyard near Verona, archaeologists have discovered a pristine mosaic floor that dates back to the 3rd or 4th century A.D. Verona is located in the northern part of Italy and had very important settlements during ancient Rome.

Aside from mosaics, there are other ancient monuments discovered such as the amazing Roman amphitheater which is known as the Verona Arena.

Other mosaics from this villa were discovered by accident in 1887 when people were working on the vineyard. During this time, the owner of the vineyard was allowed to profit from the mosaics and sold them to city officials in Verona.

The last time that this site was excavated was in 1922. Local sources have claimed that the land was known to hold ancient artifacts from Roman times. Even some mosaics were displayed in a city museum that was excavated from the site. However, excavators reburied the 10,000 square feet site which was later forgotten by everyone except archaeologists.

Almost a century after the last excavation, the state funded a project which started last year to search and discover ancient lost mosaics. However, it was hard for the newer archaeologists since the ones back in 1922 did not fix precise coordinates for the location of the villa.

On May 18, the archaeologists dug on this site and uncovered part of the mosaic. The owner of the ancient villa is not known; however, the quality of the mosaic suggests that the owner was rich, either an associate of the Imperial entourage or a local official.

The newly discovered mosaic was compared with other photographs and it’s estimated that it dates back to the 3rd or 4th century A.D.

It’s amazing just how much we can find by digging around places where ancient civilizations lived. Hopefully, there will be many more digging sites and the finds will remain in a pristine condition. It will be an amazing walk in history.