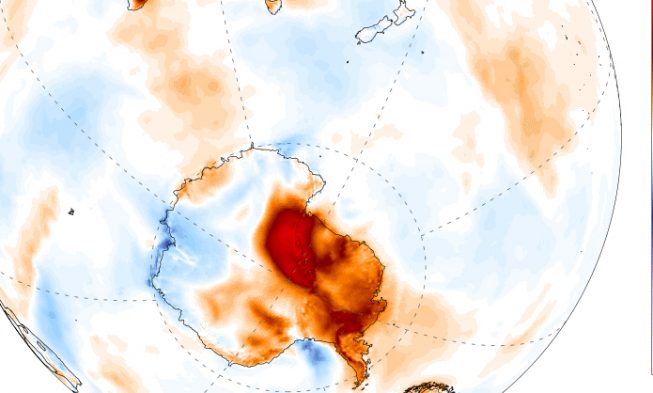 On Thursday, in Antarctica, a record high temperature of almost 65 degrees was reported. The scientists confirmed – this would be an all-time record high for the usually bitterly cold continent.

This particularly high and unusual temperature for this area was reported on the tip of the Antarctic Peninsula. This was at an Argentine research base.

If you ask the scientists from the World Meteorological Organization, they will tell you directly and with great certainty that Antarctica’s peninsula is definitely among the fastest-warming places on earth.

The rate at which is heating is almost by 3C over the past 50 years. There is no doubt that most of the glaciers in the area are melting – and rapidly.

The planet is trying to tell us something

There were locusts in Africa recently

It was 65 degrees in Antarctica today

We must wake up and take care of our planet

After looking extensively into their satellite imagery, the WMO could state with certainty that the cracks in the Pine Island Glacier have been getting bigger and bigger – and fast – in the past few days.

The spate of warmth that we’re witnessing in recent times is due to a high-pressure ridge that has remained active for several days across the country. High-pressure systems prefer milder temperatures.

Now, because of a certain wind particular for these areas, this impact got intensified at a local level. The wind is characterized by air sweeping down a mountain. This particular air starts to compress as air pressures increases near the surface of the Earth.

This is what makes the warming process go even quicker.

Also, minor warming changes will absolutely lead to significant increases in the energy you have for the ice to melt. The result is that the ice shelves along the peninsula are melting. And we can see this.

Moreover, we have gathered some data from the National Oceanic and Atmospheric Administration. We’re looking at places closer to home now. The winter of 2019-2020 is, so far, the warmest on record for the lower 48 states of the U.S. If that doesn’t tell us something, then I don’t know what will.