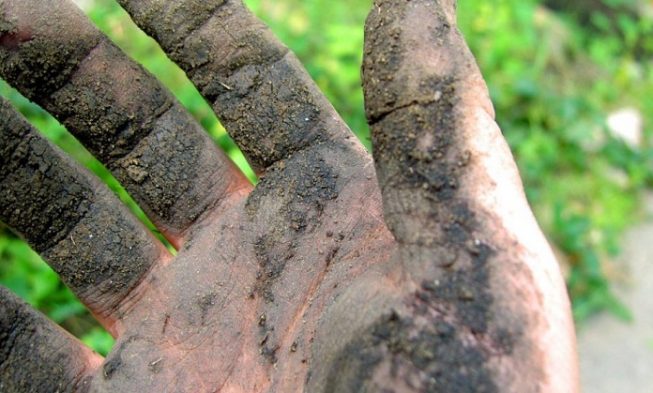 Working on your garden and getting your hands dirty is not only a relaxing job but will also benefit your psychological state. Microbes that are contained in the organic soil can be healthy for your mind and make you feel content and healthier.

Farmers and gardeners have been telling us about the benefits from their work for millennia and now it’s finally proven. The feeling of content and happiness that people get from gardening or farming is not a coincidence at all.

These microbes work in a way that the cytokine levels in the red blood cells to increase. The increase of cytokine will lead to a higher production of serotonin in the brain.

When humans are exposed to this bacterium that is found in healthy soil, their levels of serotonin rises. Serotonin is a hormone that is released from the brain to make us feel much happier and relaxed.

The lack of serotonin in the brain is linked greatly with psychological disorders such as anxiety, OCD, depression, and bipolar disorders.

Studies have shown that cancer patients exposed to the mycobacterium vaccae have signs of less stress and feel a better quality of life.

Researchers have made tests to insert through ingestion and injection on rats and the results were compared to a control group. Notable benefits that were found were lower stress, cognitive ability, and better concentration which lasted 3 weeks.

The antidepressant microbes in the soil are also researched for the improvement of the cognitive function, rheumatoid arthritis, and Crohn’s disease.

Gardeners and farmers are in constant contact with the bacterium due to the topical contact from it, getting it into the bloodstreams through small cuts, or inhalation.

Even though the physicality of gardening can lower stress and increase the mood by itself, it’s amazing to discover that there is some scientific way proven for the already known benefits.

Without any harmful side effects caused by vaccae and its potential to heal a lot of psychological disorders, it will only take time for it to become something more in the future. In addition to the health benefits, you will have fresh and local vegetables or fruits. Even if the gardening work is only flowers, you will still have something beautiful to look at and smell. Bees will appreciate this work as well, so make sure you try and start gardening.