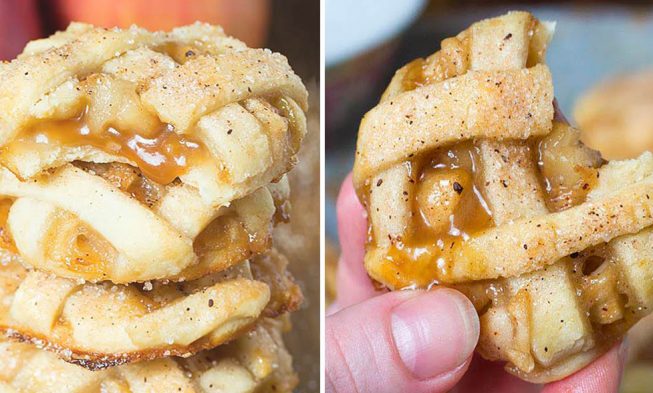 Apple Pie Cookies are sticky and chewy, bite-sized caramel apple pies, which are something more than apple pie, specific for the Americans. Sometimes, for many cooks, the regular old apple pie recipe is just too much dessert to handle. Instead, they found a better alternative to prepare the gooey bites, which bring you the best taste of those fruity-caramel flavored cookies that taste like a traditional pie. To eat them the fork isn’t required!!!

This awesome recipe for apple pie cookies is made with brown sugar and nutmeg with homemade cinnamon glaze.

It’s, of course, not something new invented, because many similar recipes can be seen on the internet, which are quick and simple to prepare and require just a few simple stores bought ingredients – canned apple pie filling and frozen pie crust.

Since you have a few fresh apples at your home, it is nonsense to buy filling when you can make the homemade filling from them. For those who already have a homemade filling, they will need only homemade crust.

If you want to prepare mini apple pies, and you’re in a hurry, you can use the shortcuts and take can of Apple Pie Filling and a refrigerated Pie Crust. It will take only a few minutes to make identically tasty Apple Pie Cookies.

The autumn is passing by slowly but surely, and the time of the treats and the smell of cinnamon and other aromatic spices are spreading through the house while the cake with apple or pumpkin is baking in the oven. These Apple Pie Cookies with the cinnamon flavor are the real comfort food for cold and rainy days that are coming.

For those who have the time for baking, they can mix the crust, peel the apple and make the filling. But, if you don’t have time, then you can treat yourself with warm, juicy mini pies because the store-bought ingredients really make the job easier. You can simply coat one crust with caramel and spread the apple pie filling, then the cut second pie crust into strips cover with the filling. Sprinkle the cookies with cinnamon-sugar and your mini pies are ready for the oven. 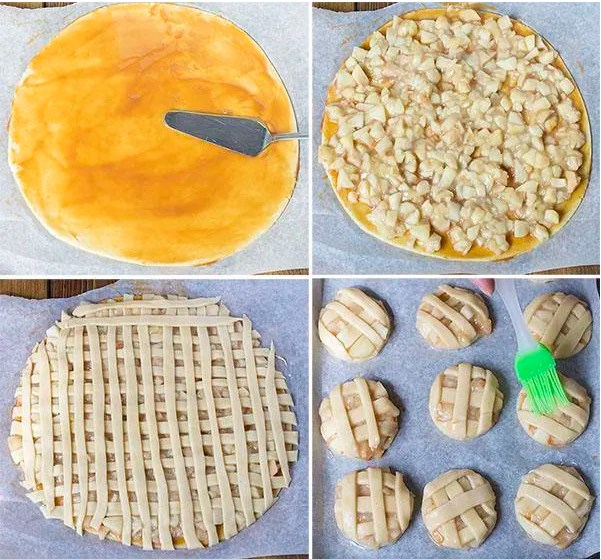 The Cinnamon Apple Crumb Cake is the perfect dessert for crisp weather coming up.

Note: you can use 1 package Refrigerated Pie Crust

2)         In a pot combine cornstarch, brown sugar, sugar, nutmeg cinnamon, and water. Boil the mixture over medium-high heat whisking constantly. Boiling should be around 2 minutes or until thick

5)         When apples are soft but not mushy, remove them from the heat and leave them covered to soften and cool.

6)         Cooled apples should be removed from the sauce and chopped into small pieces, and set them aside.

For the Pie Crust:

2)         Add chilled butter cubes into the flour mixture and by using a pastry blender incorporate with the mixture.

4)         Repeat with another 2 tablespoons water, blending until the dough holds together.

5)         The dough should be divided into two equal pieces, and each disc packed with plastic wrap

7)         After dusting the working surface with flour, place the chilled dough and roll it out 1/8-inch thick.

1)         Line cookie sheet with parchment paper, and spray it with non-stick spray and set it aside, while the oven is preheated to 350 F,

2)         Onto one pie crust spread the caramel sauce, then spread chopped apple pie filling over the caramel and gently tap the filling using your palms.