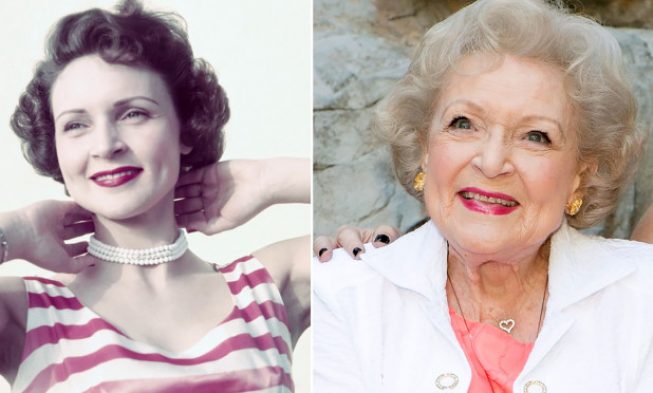 On January 22, 2019, the TV icon Betty White, with her friends of poker and a game celebrated her 97th birthday. She is the last surviving member of the Golden Girls cast and she has a lot of fans. During the interview done by the Parade magazine, she joked that her long life and her age are due to vodka and hot dogs.

She has stolen fans’ hearts for a considerable period since her pioneering work in the 1950s.

In 2014 White was awarded the title of Longest TV Career for an Entertainer in the Female category, for her more than 70 years in show business. Her other known award is the honorary title Mayor of Hollywood, in 1955, gained for the first woman who produces a sitcom (“Life with Elizabeth”).

This amazing American woman seems to have no plans on slowing down and she has won the admiration of her fans everywhere. She is, also famous in sharing her humor and love of animals on numerous occasions and providing the world with entertainment.

More than four decades White has been a representative and on the board of the Greater Los Angeles Zoo Association. Using her experience in this area in 2012 she published a book, Betty & Friends: My Life at the Zoo, enriched with anecdotes and photos of her favorite animals there.

She is a person who can inspire others and owns a collection of the best quotes:

“A lady likes to be complimented on her looks, her eyes, her figure. But the personality comments are much appreciated. “

“I’m a teenager trapped in an old body.”

“My mother always used to say, ‘The older you get, the better you get. Unless you’re a banana.’”

“If one has no sense of humor, one is in trouble.”

“You can always tell about somebody by the way they put their hands on an animal.”

“I cannot stand the people who get wonderful starts in show business and who abuse it. Lindsay Lohan and Charlie Sheen, for example, although there are plenty of others, too. They are the most blessed people in the world, and they don’t appreciate it.”

“I am in the acting business. That’s the ego business.”

“The bottom line is, I’m blessed with good health. On top of that, I don’t go around thinking ‘Oh, I’m 90, I better do this or I better do that.’ I’m just Betty. I’m the same Betty that I’ve always been. Take it or leave it.”

“You can lie to anyone in the world and even get away with it, perhaps, but when you are alone and look into your own eyes in the mirror, you can’t sidestep the truth.”

“Animals don’t lie. Animals don’t criticize. If animals have moody days, they handle them better than humans do.”

“So you may not be as fast on your feet, and the image in your mirror may be a little disappointing, but if you are still functioning and not in pain, gratitude should be the name of the game.”

“I don’t care whom anybody sleeps with. If a couple has been together all that time — and there are gay relationships that are more solid than some heterosexual ones — I think it’s fine if they want to get married. I don’t know how people can get so anti-something.”

“I just make it my business to get along with people so I can have fun. It’s that simple.”

“I’m not into animal rights — I’m only into animal welfare and health. I’ve been with the Morris Animal Foundation since the ’70s. We’re a health organization. We fund campaign health studies for dogs, cats, lizards, and wildlife. I’ve worked with the L.A. Zoo for about the same length of time.”

“Enjoy life. Accentuate the positive, not the negative. It sounds so trite, but a lot of people will pick out something to complain about, rather than say, Hey, that was great! It’s not hard to find great stuff if you look.’ ”

“Animal lover that I am, a cougar I am not.”

“I’m the luckiest broad on two feet, I’ll tell you that. They say once a woman passes 40 she doesn’t get any good parts, so I’m blessed.”

“I have no regrets at all. None. I consider myself to be the luckiest old broad on two feet.”

“Retirement is not in my vocabulary. They aren’t going to get rid of me that way.”