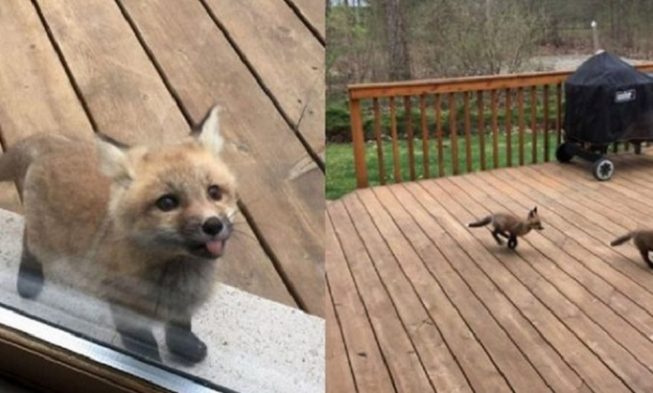 Because almost the entire world was in lockdown, many animals started roaming free across populated areas. Monkeys showed up in Central Thailand in massive numbers back in March when the entire country was in lockdown searching for food. Even the Sika Deer from the Nara Park in Japan started roaming the streets looking for people to feed them as they used to in the park.

The lockdown benefited a big part of the wildlife, especially those that were endangered. The Olive Ridley turtles were able to roam the beaches in India and lay their eggs without any human interruption. Additionally, waters in the Venice Canals cleared up and fish can be seen roaming through them. The quarantine and lockdown had a great positive effect on pollution worldwide.

It’s a no brainer that some animals will appear in rural places or places near mountains where wildlife thrive even without lockdown. In this case, baby foxes showed up at the porch of an old woman in Illinois since last spring.

One Reddit user that goes by the name Vechrotex posted these photos while he was visiting his grandmother’s house. Since the first time he posted the pictures, they became viral.

His grandmother’s house is located in a wooded area so seeing wild animals roaming is nothing new to them. However, seeing such adorable animals, especially in their front porch was something special for both of them.

The first photos that Vechrotex posted were from only one baby fox licking the sliding glass door. It’s no wonder the photo went viral. Since then, the Reddit user posted updates on the baby fox along with its siblings showing up in front of the porch. In some pictures, you can even see their mom watching over her babies while they’re on the porch.

In the forested areas of Illinois, it’s typical to see red foxes wandering around.

Since the first time the photos were posted, the baby foxes grew older and don’t visit grandma’s house as often as before. However, both Vechrotex and the grandmother are hopeful that one day they will come and visit them again.

The red foxes are known to live in different habitats such as deserts, mountains, grasslands, and forests. They are even known to adapt in environments built by humans such as suburban areas, farms, and larger communities. The fox is mainly characterized by its cunningness and intelligence.

Typically, the red fox feeds on rabbits, rodents, birds, and other small animals that it’s able to hunt down. However, its diet can be very flexible depending on where they live. Foxes can eat fish, frogs, vegetables, fruit, and sometimes even worms. They are known to visit people’s houses and eat from their garbage of left-over pet food.

The female fox usually gives birth to 2-12 baby foxes. During the early stages, the red fox has a brown or gray colored coat. The fox cubs are blind, deaf, and can weigh about 120g. After 14 days, their eyes open and grow up to be 350g.

The iconic red coat typically grows by the end of the first month. However, not all red foxes are red. Red foxes can have a reddish-brown, silver, black, and gold colored coat. Typically, foxes are hunted down for sport or for their beautiful fur.