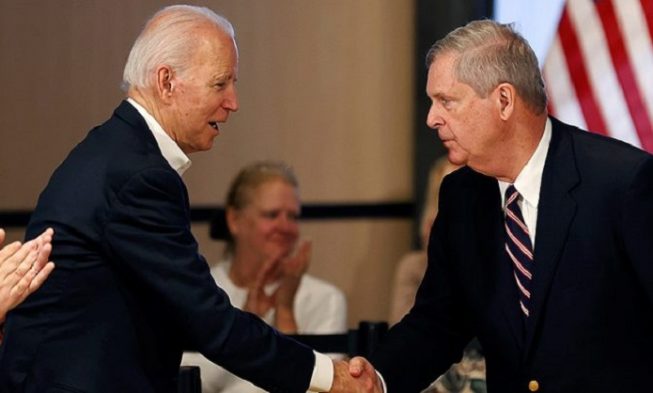 According to certain people familiar with the nomination process, former Iowa Governor Tom Vilsack has become the top pick for the leading contender for Agriculture Secretary in the Biden administration, reprising a position he held under President Barack Obama.

The announced decision of President-elect Joe Biden to appoint Tom Vilsack on this particular position and in leadership for the U.S. The Agriculture Department was met with immediate backlash from progressives.

They firmly believe that since he had a formerly friendly record with Obama’s government, he should have been disqualified right from the start.

The people, however, said that although Vilsack was the preferred candidate for this particular position, a decision has still not been officially made by the current President-elect Joe Biden as of this moment.

Another person that is on his list of possible candidates is Ohio Senator Marcia Fudge and former Governor Jennifer Granholm of Michigan.

Tom Vilsack during his eight years under Obama managed to get himself quite well-known by the nickname of Mr. Monsanto. He got it for authorizing more new genetically modified species than any Agriculture Secretary in history, and, naturally, for making a ton of money for each of these approvals.

Agriculture Secretary-designate Tom Vilsack commits to Black farmer advocates that he will ensure “fairness and equity” for African-American farmers https://t.co/Lu3sZndIn2

Prominent civil rights groups have shown public concerns in regards to Vilsack’s background towards racial justice issues. They referred straight to the way black farmers were getting treated by his department, as well as how he fired USDA official Shirley Sherrod after she was smeared by Breitbart’s far-right publication back in 2010.

Former Democratic Senator Heidi Heitkamp of North Dakota is also on the list of possible candidates in the Biden team. After recent events, Biden got a letter written by a number of progressive groups, in which they are vigorously criticizing her as being too close to the interests of corporate agriculture.

On top of all of this, within his party, Biden faces heavy pressure to diversify his cabinet with more women, minorities, and figures from the radical side of the party. It’s gonna be a tough mandate for Biden.