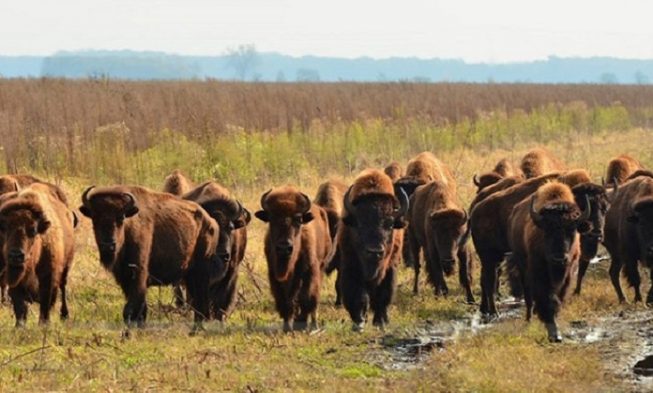 Long ago, the prairie was the primary ecosystem in Indiana. However, in the last 200 years, almost the entire prairie was plowed under for agriculture.

As of today, less than 1% of the native prairie remains.

For the last 20 years, The Nature Conservancy was working to convert 7000 acres of row-crop farmland into the diverse prairie.

As of now, over 750 species of plants and 250 species of butterflies are located on the restored chunk of prairie that is called the Kankakee Sands Nature Preserve.

A bigger number of native insects and plants were able to find their way back home on their won. However, the bison needed little assistance.

The Nature Conservancy brought 23 bison on the preserve in October 2016, from another preserve in South Dakota.

Kankakee Sands site manager, Ted Anchor, states that “They got off the truck and in about 5 hours, they were settled like they had never left.”

Ten calves were born in 2017 and ten more were brought from South Dakota, increasing the total number of bison to 43 in Indiana.

These are the first pure-bred bison in the state in 200 years.

Even though these are a treasure to Indiana in their own right, The Nature Conservancy brought them in for much more than their brilliance.

The bison is the essential partner in the restoration of the prairie. The grasslands need the bison the same amount as the bison needs the grasslands.

Anchor explains that “When bison graze grass, it gives a competitive advantage to all the neighbors of that plant, such as native wildflowers.”

Additionally, they keep down tree saplings to stop the prairie from becoming a forest and cut furrows in the dirt with their hooves, helping the dispersal and planting of seeds.

Anchor adds that “It’s really about restoring the interactions between the plants and animals for the sake of the ecosystem.”

More than 60 million bison roamed free in the United States in the past. Their population fell to less than 1000 by 1889 and as of now, about half a million bison are alive because of the conservation efforts.