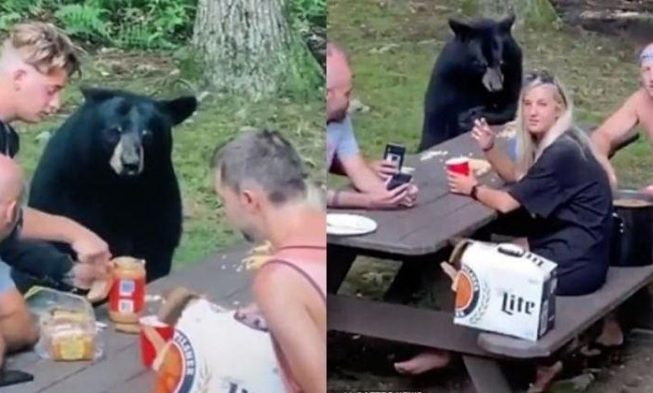 When visiting a national park or a nearby forest, you’re likely to encounter some roaming wild animals. One of the most iconic animals in the forest is the black bear. Encountering a black bear can be a very exciting moment for many people. However, keep in mind that these animals are wild and their behavior can be unpredictable. Even though it’s very rare that a black bear attacks a human, it has occurred many times in the past. There is no exact strategy to keep yourself safe from this type of encounter since each scenario is unique. Typically, bear encounters end without any injury. All you need to do is follow some basic tips which will help you lessen the danger.

Here are some tips on what to do when you encounter a bear:

Kaitlyn Nesbit, a 29-year-old bridal store manager, along with her family, had a picnic on 6th August at a friend’s cabin. Little did they know that nearby was a bear. The wild black bear decided to go near them and even sat at the picnic table with them.

If you don’t believe, see for yourself:

This video was posted by Nesbit on TikTok and shows the bear patiently waiting for food. Other onlookers can be heard being shocked by this encounter. One of Nesbit’s family members prepared a peanut butter sandwich which the bear took it straight out of his hands to eat. The bear was quite friendly and wasn’t even a bit bothered by the humans.

Nesbit claims that she already knew that the bear was around. The owner of the cabin (Nesbit’s friend) told her that the bear is always around and shouldn’t bother anybody. Also, most of her group are very used to the wild and knew what to do when encountering a bear. However, many people criticized their actions because one of the rules of bear encounters is not to feed the bears.

Also, in Maryland, it’s illegal to feed bears since they will associate people with food. As mentioned in the tips above, it will become a problem for someone later on.

Instead of feeding them, the Maryland Department of Natural Resources claims that people need to scare them away by making loud noises, yelling, or banging pans. This way, the bears won’t come near the camps anymore.