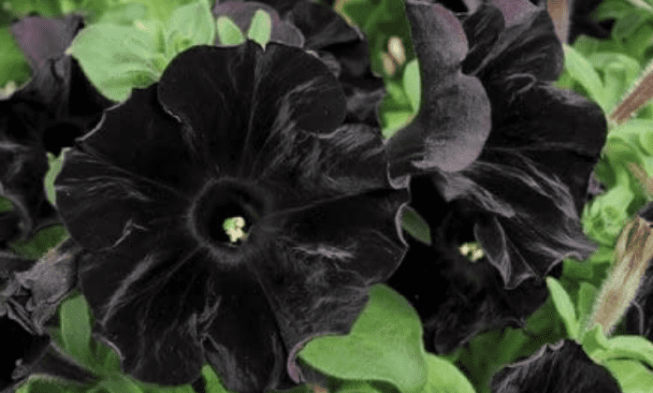 Normally, when you think of flowers you usually have some colorful plants in mind. And when talking about petunias, we know that they usually come in bright colors. Well, this one is an exception and it’s extraordinary!

Black flowers exist and they look inexplicably beautiful. It’s pretty uncommon for plants to produce black flowers, but the Black Magic Petunia, or else known as Black Velvet Petunia, is among those rare types of plants. Among the other black petunias, this is one of the darkest ones. It consists of large number of small, green and oval-shaped leaves which grow to form a neat spreading shrub that is usually around one foot high.

Since 2010, when the “Black Magic Petunia” was the star of the Greenhouse Grower’s Association Evening, gardeners fell in love with it. According to Dave’s Garden, at that event, it earned two awards for Industry’s Choice and Reader’s Choice. Even though some people did not understand the appeal, most of them went crazy about it.

The main appeal was that “black goes with everything”. Therefore, encouraging people to pursue all of their ideas that include black colors and that there is nothing wrong with it. These flowers are a hybridized variety of the petunia, which is undoubtedly the darkest variant of the flowers.

This petunia requires no special watering schedule. It’s best to water the plant in accordance with the temperature and atmosphere of your zone. So in summer season watering them generously once or twice appear to be enough. Whereas in winter, it’s good to water them mildly in the cooler days. Second next important thing is the exposure to a sufficient amount of sunlight.

Leave the blooms exposed to a full sun for at least 6 hours, and partial sun for around 4 hours. If you notice browning of leaf-edges and wilting leaves relocate the plant as soon as possible into a spot with milder sun. That’s the sign of overheating. Another thing that matters when taking care of these petunias is to know that they do pretty well in non-soggy soils and they like to be in low-humidity. Since the ideal temperature for these plants is around 18 to 24 °C (65 to 76 °F), people living in cooler zones need to relocate them to warmer places before the fall.