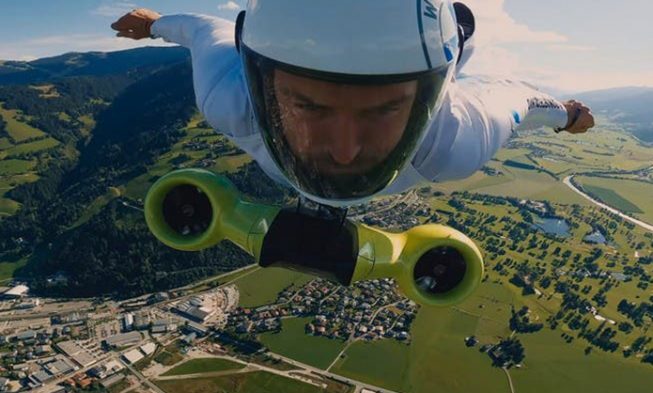 With GoPro and RedBull videos of people flying across the sky or thrillingly passing between rugged gaps and mountain passes, it was only then that the Wingsuits first managed to capture the attention of the public, just as the millennium turned.

This was depending on how brave they were, of course. But the wingsuits that we used to see on people were restricted because gravity is the source of their acceleration, and you can only fly downwards steadily.

But that’s not the case anymore! Stuntman Peter Salzmann has always dreamed of being able to upgrade his climbing skills with the wingsuit, so he had engineers at the Designworks studio of the German automobile company BMW help him bring this amazingly adventurous concept to life.

They gathered and built a sustainable gear system that comprised of a set of electric impellers that would get set up on the chest and a wingsuit specifically designed to operate with the impellers.

With this newly-made amazing electric jet pack, Salzmann, 33 years old, managed to fly over the Austrian Alps in order to test the gear for further interested customers. It took him somewhere around 3 full years to make it fully operational.

It is not unheard of to have a wingsuit, the concept actually existed from way back, but the power unit was designed from scratch. Compact, power-dense, lightweight, and highly reliable, the electric BMW jetpack is the future of the wingsuits. A 50-volt lithium battery is what powers it and provides its security.

Salzmann didn’t just test the wingsuit in some carefully set up conditions, no sir. He went and jumped out of a helicopter hovering some 9,900 feet over the Austrian Alps. That’s how he did it. BMW captured everything on tape. He is the one to be able to live and tell the tale. He landed safely at the end of a long and bumpy glide by deploying his parachute, and is looking forward to further improving this technology.