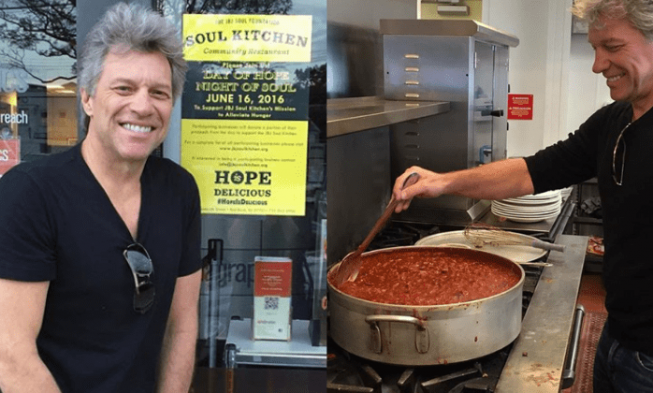 Not only is Jon Bon Jovi a successful pop star, but he’s also an amazing human being. Bon Jovi started a foundation called JBJ Soul Kitchen and right now he’s ready to open his third community restaurant. People that do not have the money to buy nutritious and healthy meals can come to the restaurant and be served hot meals without anyone judging them. The third restaurant of its kind is being opened at the Rutgers University campus in New Jersey. Bon Jovi and Dorothea Hurley, his wife, explained what inspired them to open the JBJ Soul Kitchen and the way they got involved in it.

I am hopeful that the next generation will positively impact our world – they are engaged, informed and want to make a difference. Thanks for joining us for #GivingHopeDay and sharing what gives you hope. #givingtuesday

Hurley made a statement on CBS Sunday Morning Show:

“Hunger doesn’t look like what your mind’s eye might imagine. It’s the people at your church. It’s the kids that go to school with your kids. And I think that was eye-opening for a lot of the community here that said, ‘Oh, there are no homeless people here.’”

Many people think of homelessness as a social taboo and tend to not talk about it very frequently. This stigma made people that are poor or homeless afraid of seeking help and because of that, they won’t get the resources that they need.

The pair had the goal of providing the community’s people in need with quality food, so they opened their first JBJ Soul Kitchen in 2011 in Red Bank, New Jersey. The prices on the menu of the restaurant are blank and the people eating at the restaurant can pay as much as they want to. Additionally, people that can afford to can pay for the food for others. People who aren’t able to pay at all are asked to volunteer. Almost all of the work done is by volunteers and almost all of the food is donated.

Thank you to everyone who came out for our 5th Annual Chili Cook-Off! Congratulations to our winners: 1st Place: New Jersey State Police – “Bad Medicine” 2nd Place: Lanoka Harbor First Aid – “Blaze of Glory” 3rd Place: Toms River Fire Dept., Company #1 – “The Boys on the Hill” We appreciate everyone coming out to support JBJ Soul Kitchen Toms River and all of the first responders who participated. Special thanks to Home Run Party Entertainment for providing free children’s activities and Zzak G. Applaud Our Kids Foundation Inc. for performing throughout the event. We look forward to seeing everyone again next year! #jbjsoulkitchen #tomsriver #chilicookoff #tomsriverlocal

The newest project of the pair is going toward the students of Rutgers University. These students have a hard time paying for nutritious food. Bon Jovi stated that “We all think it’s a rite of passage to study hard and eat ramen noodles. How about if it’s the only thing you can afford?”

Bon Jovi and his wife aren’t planning on stopping just yet. They plan on opening more JBJ Soul Kitchens whenever they are needed. Even though it’s nothing compared to the amazing performing life that Bon Jovi went through, however, it does give him a sense of fulfillment. He stated that:

“It can obviously never compare to performing or writing songs. But what it does do is it gives you the same sense of fulfillment, I think, when I leave here at night and you see the lives you touch. I have left here, you know, after a long night of volunteering and said, ‘That makes you feel the same kind of good.’ You know? And that’s what I say, the way to feel good is to do good, you know? Find your good and do it.”