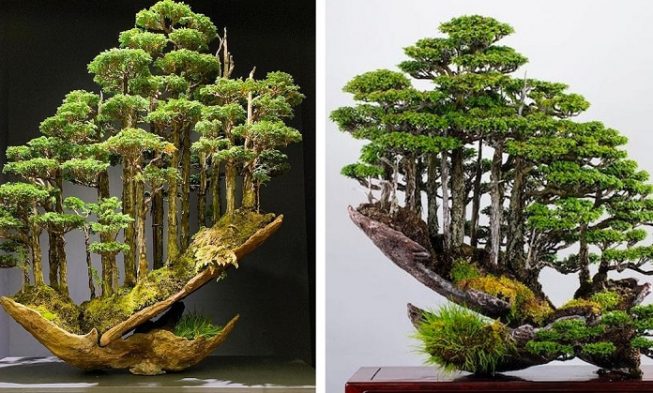 One of the most famous types and forms of Japanese art is Bonsai. The bonsai, along with Zen gardens and ikebana, is recognizable not only in Japanese or Asian cultures but all across the world.

Bonsai (Bon-sai) is a Japanese term, translating to English as ‘planted in a container’. Even though the art form is known as Japanese, it’s derived from an ancient Chinese horticultural practice. Part of this practice is redeveloped under the Japanese Zen Buddhism influence.

The art form has been around for more than a thousand years and the goal is to grow a miniaturized but realistic representation of nature, specifically in the form of a tree. Many people confuse the Bonsai trees to be a specific species of dwarfed plants. However, they are trees (any tree species) grown to be a dwarfed one.

There are different techniques to grow a Bonsai such as pinching buds, pruning and wiring branches, and restricting but not abandoning fertilizers. This way the tree will grow healthy and be kept under four feet in height.

One of the most respected bonsai masters is Masahiko Kimura born in 1940. Before, Kimura was seen as a rebel because they broke many traditional rules of bonsai. Later on, his works were accepted and now, he has the recognition as one of the greatest bonsai masters.

Kimura’s controversial art form consisted of pieces of deadwood intertwined with living wood. Hinoki forest planting is one of Kimura’s most famous bonsai. It is a sculptural masterpiece, balancing two pieces of interlocking slate and it features Hinoki cypress and Itoigawa Shimpaku Juniper.

Kimura’s original version was created more than 20 years ago and now it’s his most prized possession. Similar bonsai have been sold to many people, however, his first version is still located in his garden in Omiya, Japan. Kimura recently opened up his incredible garden for visitors.

Despite his age, Kimura has no signs of stopping his talent. With time, his style and legacy have grown and made him a legend in his field. Kimura will continue to create new bonsai and keep the tradition alive through demonstrations, exhibitions, and many publications.