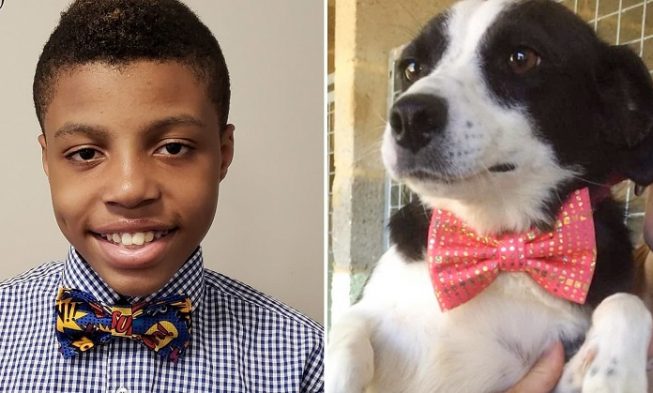 Seeing an animal with a bow tie it is unusual but jet very eye-catchy and cute at the same time. Creativity and love of dogs prompted this boy to start doing what he loves.

Many young boys like to do spend their free time playing video games or going outside with their friends. But that’s not how 12-year-old Darius Brown spends his free time.

In order to convince new owners that are looking for a furry friend, he founded an organization called “Beaux and Paws” in New Jersey. It creates bow ties for dogs living in a shelter that is looking for forever home.

“It helps the dog look noticeable, very attractive. It helps them find a forever, loving home… I love everything about dogs and cats.” Darius told the Today Show.

From a very young age, he was interested in creating and designing many things. Unfortunately, when he was two years old he was diagnosed with a delay in fine motor skills, speech delay, and comprehension delay. But his supportive family taught the little boy to use his creativity in creating new things.

With his love for animals and a little bit of imagination and creativity, he was inspired to start his organization.

Four years ago his mother Joy Brown, 40, and his sister Dazhai Brown-Shearz, 22, discovered his, until then, fascinating ability. At that time his sister was studying at cosmetology school. She then found out that his brother knew how to use a needle, and because of that, he helped her with sewing, cutting fabrics and making hair ribbons. His creativity began to expose.

His sister, Dazhai, told Today: “With his fine motor skills, he wasn’t able to really use his hands well — tying a shoe was challenging. My mother and I came up with the idea that if he helped us with things like prepping the ribbon or cutting it, and sewing fabric together, it would help him. And it did — it worked!”

His ideas were unstoppable, as he started to make a new bow tie for each day. They are like his signature; he wears them everywhere he goes.

After many people showed interest in his work, he knew that he can make something out of his talent. Soon after his realization, he opened “Beaux and Paws“.

By selling his bow ties, he donates his earnings to the American Society for the Prevention of Cruelty to Animals, and from the rest of the income, he buys fabric to continue with his work. The community donates more materials and supplies so that Darius has enough to continue doing what he loves.

Joy Brown stated:
“The donations help a lot because we were just digging in our pockets, buying the fabric ourselves.”

For his hard work and love of the animals, former President Barak Obama wrote him a letter to congratulate him for his philanthropy and encourage him.

He donated his bow ties to animal shelters to many states in the US and continues to produce, even more, just to help the animals to find a better life.