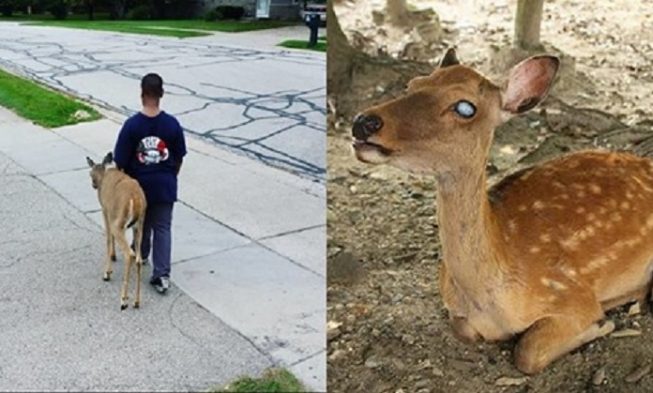 In the morning we all usually want to do the same things- get out of bed, wash out teeth, get dressed, and start with our daily routines. However, this is not a regular morning to-do list or one boy who lives in Chicago, Illinois. He spends most of his mornings helping a blind deer to find food, and people on the internet were amazed by this idea and generosity.

Most stories like this go viral and find a place in peoples’ hearts. While the 10-year-old boy was walking the poor little deer around his neighborhood, one neighbor spotted him. They instantly noticed that the deer was blind, and he tried to lead it around to find a patch of grass in the suburban sidewalk. The boy was so dedicated helping the deer that he only wanted to make sure it is fed well. Every morning before school he went out and walked her around to various spots. The neighbor touched by this view took a photo of the duo and posted it on Imgur. It instantly caught the eye of millions of users on Imgur.

IDNR aka the Illinois Department of Natural Resources, as a licensed wildlife rehabilitation group, were informed and later picked up the bind deer. They adopted her and as the only legally authorized group that treats and shelters dears, they continued to take care of her. 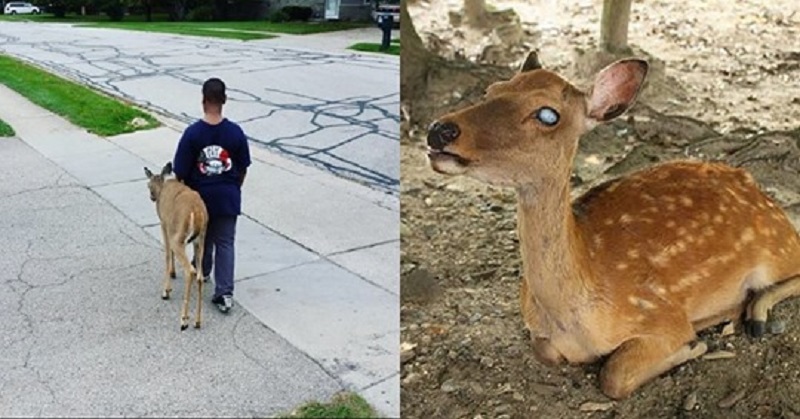 After the separation, everyone thought that the 10-year-old will be having a hard time without his deer friend. However, he proved he is much wiser for his age, as he only wanted to make sure the deer was okay and wanted what was best for her. He had free time in the morning and to fill it, he walked out to help the deer and made a great job. He was happy with what he did and was fine after she went with IDNR.

In such situations, we can see how some people have huge hearts and love, especially for animals. This kind of love is true and deep. The only way to help the animals in need is to show them, love, nurture them and support them. This young boy showed up when she needed him the most, and didn’t hesitate when she was leaving.

Their friendship lasted for a few days, but it left a mark in his heart. And hopefully, the deer felt this connection too. He didn’t have an intention to adopt her or name her; he only wanted to make sure she was safe and nurtured.

The neighborhood was thrilled when the INR came to retrieve the deer. Every neighbor from the suburb came out to watch the operation. The 10-year-old boy was there too, just to say goodbye to the rescued deer. There were no tears at all. In fact, all of them were happy that she will be handled in good hands.

While everyone is preoccupied with work and hardly show a little love, this boy will teach them that true love can occur in any form. The best friendships are made when we want what’s best for them, whether it refers to people or animals.