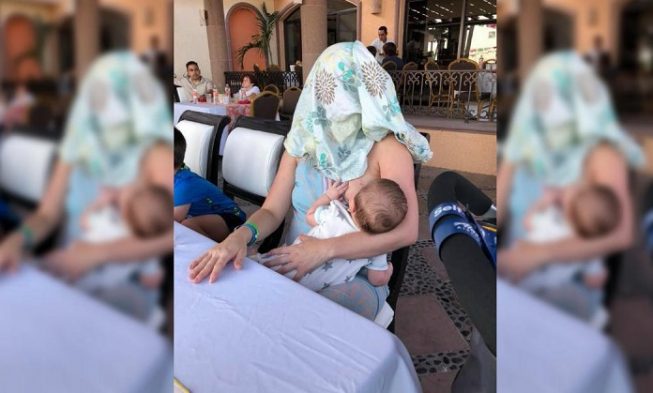 Last year while vacationing in Cabo San Lucas Mexico, Melanie Dudley proved she can give it as good as she gets. As Melanie Dudley breastfed her 3-month-old son in the corner of a restaurant, her back to other diners, a stranger approached and asked her to cover up.

A photo of her reaction has sent a wave of applause through the internet and cheers from breastfeeding supporters around the world.

Normally, Dudley tries to nurse her baby as discreetly as possible, she told TODAY.

“I did have the cover on, but it was so hot. It was like, 95 degrees, and my little baby was sweating,” the Texas mom recalled. “I said, ‘You know what? I’m on vacation, I’m taking this off.’”

When the stranger approached and asked her to cover up, Dudley was left speechless.

“I was kind of stunned,” she admitted. But then she had an idea — and asked her husband to pass her the nursing cover.

“I just put it over my head. I don’t know why,” she said. “It wasn’t like a salacious fight or anything. That was just my response. I had no words so I thought, I’ll just cover my head instead.”

Melanie Dudley had a funny response to stranger who asked her to cover up while nursing her child.

Her husband snapped a photo of the silly moment and he later shared it with his mother, who posted it on Facebook. One of her friends then shared it on her page, with permission, and the photo took on a life of its own, getting more than 115,000 reactions and 200,000 shares.

Dudley, who also has 4-year-old twins, said she tries to cover up whenever she nurses in public, something that still feels new to her. Although she breastfed her older boys for a year, “it was impossible to do both at the same time when we were out so I never had this problem.”

It’s a different story now that she just has a single baby to feed.”With my little one, it’s so much easier to nurse out in public,” she said.

Dudley said the response to the photo has surprised her. While she has received a few negative comments, most of the comments have been supportive, particularly the ones from Europeans.

“I just can’t believe it. It’s wild to me,” she said. “If there’s a larger message to this, it’s just be supportive.”

She said several people who expressed discomfort with public breastfeeding suggested she nurse in the bathroom, an idea she quickly dismissed.

“That’s not very hygienic,” she said.

Instead, she hopes her story provides inspiration to other nursing moms.

“I hope the momentum keeps growing. Let’s be supportive of women who want to nurse in public, with or without a cover,” she said. “I mean, just do your thing. It’s not hurting anyone.

Great job Melanie! Women like you are doing your part to put these offensive requests in their place. Here’s hoping that as we move into the future we can really stuff it down. Cover it up, it’s disgraceful.