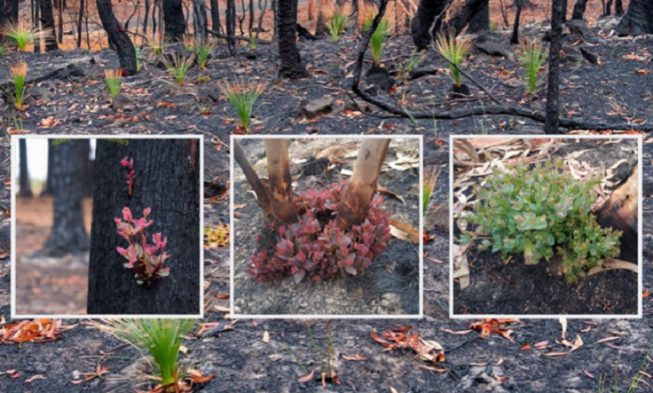 The evidence of the consequences of the bushfires in Australia shows that more than 17 million acres have burned over the last three months. The heat has dried vegetation and pulled moisture from the land. Also, almost a billion animals, including a large number of koalas, have lost their lives, or escaped from their habitats. It will cause big changes in vegetation and carbon emissions will rise as burning trees release carbon and fewer living trees are left to pull CO2 out of the air and store it.

However, there is some good news recently shared by photographers, showing incredible photographs of regrowth bushes in areas recently devastated by bushfires. It gives hope to numerous numbers of online users who are reeling from the ongoing bushfire crisis.

Here you can find the photos done by the local photographer Murray Lowe, who snapped them in the Kulnara area of New South Wales’ Central Coast region.

Ventured out into the fire grounds today to capture some images of how the Aussie bush responds to fire, and the way it…

“Ventured out into the fire grounds today to capture some images of how the Aussie bush responds to fire, and the way it regenerates itself and comes back to life.”

He adds that it happens even without any rain. On the photos are seen life bursts through the burnt bark from the heart of the trees, which shows that the life cycle begins again. It is for Lowe so heartening to see the bushes coming back to life again.

Lowe’s pictures have been shared more than 40,000 times since he posted them on Facebook. Lowe is delighted with the followers response.

In a subsequent post, he wrote that he did not expect it in his wildest dreams, that his photographs would arouse such interest. For him, that experience is mixed – humbling and heart-warming.

Regrowth is already showing in the Blue Mountains after the #bushfires. pic.twitter.com/JM8oWXHH3m

The reaction from Facebook users is extremely positive, and they thank Lowe for sharing these images, which give a glimmer of hope in these dark days.

One comment points out that the natives of Australia have pointed out that the Australian country depends on a fire that can be regenerated, but it requires people who understand it.

Regrowth is already showing in the Blue Mountains after the #bushfires. pic.twitter.com/JM8oWXHH3m

Lowe has become very popular for his photos and is in high demand, so he now sells prints. His plan is to make a big part of the profits for fire victims.

While authorities and voluntary firefighters continue to fight for fire control across the country, many other Australians have also posted photos showing the regrowing of the forests in their regions