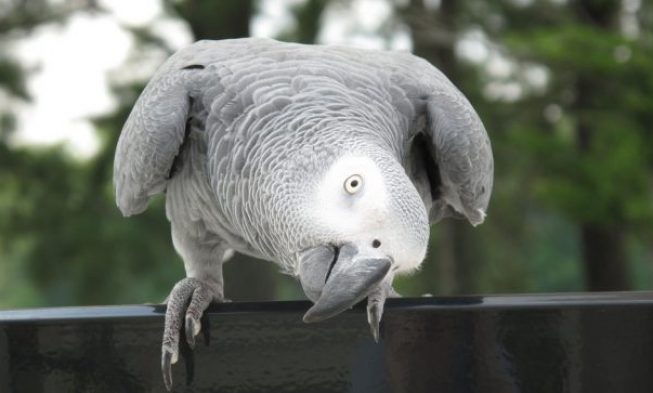 Nigel is a grey African parrot who flew away from his home in California in 2010. Fortunately, four years later he returned back to his owner, Darren Chick.

His owner is British, so Nigel learned to speak in a British accent. But when he returned, he blathered in Spanish, and started to ask for some man called ‘Larry’.

His rescuer is called Julissa Sperling, owner of a dog-grooming business. Nigel was constantly chattering and whistling at her front door. When she heard the parrot, Julissa took him inside and she searched for a missing pet advertisement she had seen before. Luckily, he matched the picture.

Julissa has never heard nor seen a bird more talkative that Nigel, and to her surprise, he was barking like a dog.

She said: “I’m from Panama and he was saying, “What happened?” in Spanish.”

While she was searching for Nigel’s pet advertisement, she found an owner that has a missing parrot similar-looking to Nigel. Sperling sent Teresa Micco, the owner of the missing parrot, a photo but it didn’t match.

She knew it wasn’t her pet because Nigel has a microchip entrenched in his leg. Julissa was sad because she didn’t find the right owner, as Micco acknowledged the parrot wasn’t the one she was looking for. But she didn’t give up. She was determinate to find Nigel’s owner.

However, no one registered parrot’s microchip. She had to trace paper sales records to the Animal Lovers pet store in Torrance. Luckily, the shop made note of the number Nigel got on his chip, as they kept all of the old paper records.

Animal Lovers kept records from before. Micco knew how it was to lose a pet, so she tried phoning Darren Chick. After he didn’t pick up, she went to his house, introduced herself, and asked: “Have you lost a bird?”

Chick was confused at first because he thought she meant recently. Micco verified his name and described how she got his long-lost parrot. But he couldn’t believe what he was hearing.

At first, when they reunited, Nigel bit him, but after that everything went well. Mr. Chick got emotional quickly, as seeing his parrot brought a tear in his eye. He said: “He’s doing perfect. It’s really weird, I knew it was him from the minute I saw him.”