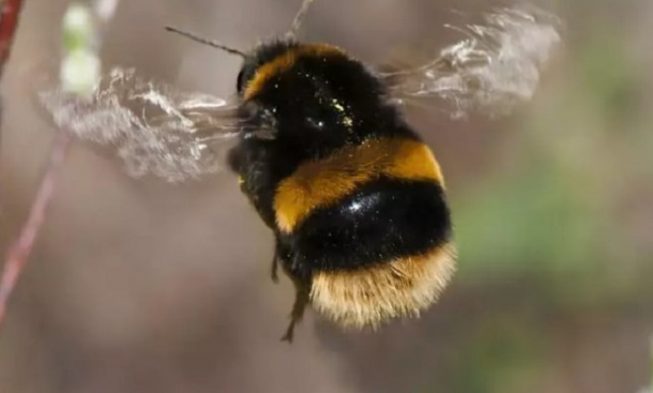 Along with the gray wolf, the northern spotted owl, grizzly bear, and about 700 other extinct animal species, to the list of endangered species has been officially added the bumblebee

According to National Geographic, there are more than 3,000 bee species in the United States, of which about 40 belong to the genus Bombus—the bumblebees. The bumblebee (Bombus affinis), had been thriving in 28 states and the District of Columbia, but over the past two decades, the bee’s population has plummeted nearly 90 percent. The U.S. Fish and Wildlife Service reports that the bumblebees are “now balancing precariously on the brink of extinction.”

Advocates for the rusty-patched bumblebee’s listing are disappointed and are in the serious conflict over the fate of the Endangered Species Act under the Trump administration.

“There are a few little spots where we know they are. But only a really few spots.”

Bombus affinis, as the scientific name of the bee, was given due to the red patch on its abdomen. On the list of the endangered species, Bumblebee was set on February 2018, but this list was not taken seriously until now.

“We are thrilled to see one of North America’s most endangered species receive the protection it needs. Now that the Fish and Wildlife Service has listed the rusty-patched bumblebee as endangered, it stands a chance of surviving the many threats it faces — from the use of neonicotinoid pesticides to diseases.”

Additionally, the U.S. Fish and Wildlife Service announced that the bumblebees are among the most important pollinators of crops such as clover, blueberries, and cranberries. However, they are almost the only insect pollinators of tomatoes. The estimation of the economic value of pollination services provided by native insects in the United States” (mostly bees) is about $3 billion per year.

The human encroachment is one of the main factors in the declining trend of its population, which led to the subsequent loss of their natural habitat. Therefore, classifying them as Endangered Species will be the first step of protection of these bees and other pollinators.

A senior conservation biologist in Xerces Society, Rich Hatfield emphasizes that by protecting the rusty patched bumblebee and the entire suite of pollinators that share its habitat, will also benefit the natural ecosystems and agriculture,

Besides, classifying them as Endangered Species, which is a positive step towards the conservation of this species, the actual on-the-ground conservation will help it move toward recovery.

Of course, this move will bring new challenges, which are supported by the petition from American Petroleum Institute, National Cotton Council of America, National Rural Electric Cooperative Association, National Association of Home Builders, and two entities to the Secretary of the Interior and Acting Director of the U.S. Fish and Wildlife Service. This petition aims at getting a year’s delay in the listing, the time needed to overstate the implications of this hasty listing decision.

All signed institutions on the petition and experts believe that this bee is one of the most significant species listings in decades in terms of scope and impact on human activities.

Because of the drastically reduced population of pollinators in the United States, more than one-third of the plants grown are in danger. The reduction of the population of bees is due to the destruction of natural resources through monoculture and generous use of pesticides and herbicides on GMO crops.

Hence, it is very important to support the efforts of listing this bee as an endangered pollinator and acting in protecting it in full spectrum.

The signed agreement that urges the listing of the rusty-patched bumblebee is a result of the actual believe of people that such conservation efforts should have started sooner.