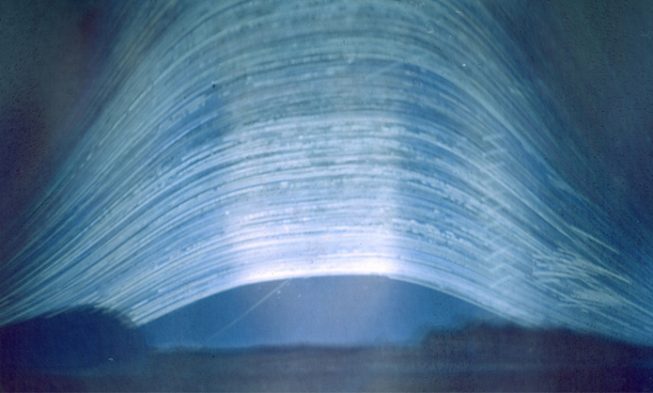 Only one week after the closing ceremony of the London Olympics took place in the year 2012, while she was still working on her MA in the field of Fine Arts at the Hertfordshire university, Regina Valkenborgh decided for some reason to put a film-lined beer can in the faculty’s campus observatory.

Apparently, at some point, she absolutely forgot she had done that because 10 years later, unknowingly, she managed to create the longest exposure photograph ever taken on the inside of the can.

From an aluminum beer can, while using duct tape, as well as light-sensitive photographic paper, this girl managed to create a pinhole camera, literally out of scratch.

What may be the longest exposure photograph in history was taken at Bayfordbury Observatory over 8 years – using a pinhole camera made from a drinks can. https://t.co/25QSIoYmBt

This amazingly creative girl was interested in taking pics using the old-school technology. Using the technique that we know by the name camera obscura, she experimented with pinhole cameras. A severe instance of this technique is her beer-can camera.

These days you don’t see many examples using long exposure. This is a legacy from the early days of the media, back in the days when cameras had sluggish shutter speeds. Usually, what they would do back then was leave the plates for a good amount of time exposed to light.

This is the view today from where the camera was mounted. On the left is the observatory’s oldest telescope – built in 1969, and on the right is an atmospheric research gantry constructed halfway through the exposure. pic.twitter.com/WLRTASz4kC

While technical engagements in the 1920s eventually did lead to shorter exposure times, in contemporary practices, long exposure photography, that we literally forgot about until now, has found a way back, creating otherworldly, ethereal images.

The camera created by Valkenborgh was never intended to have an exposure of 8 years. Fortunately, each day the moveable observatory holding it returned to the exact same orientation. The camera captured the view from where it sat over a period of time equal to 4% of the entire photographic history.