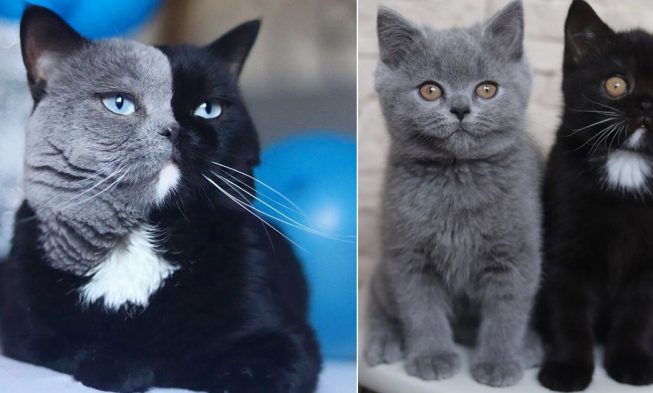 Genetic mutations and anomalies are things that can occur for both humans and animals. A genetic anomaly, or a genetic disorder, is a disease that is caused by a type of mutation or change in the human’s or animal’s DNA sequence.

A genome is the complete set of DNA that gives instructions on the development and growth of the organism’s body. The genome can change which causes these anomalies and mutations.

The chimera anomaly is probably the most breathtaking disorder that could happen to an organism. Chimera animals are made up of parent cells with different genotypes which can occur by merging more than one fertilized egg into a single egg.

Chimeras in animals are formed from at least four parent cells. Two early embryos or two fertilized eggs need to fuse into a single organism. This is why a chimera usually carries two or more different cell populations that originate from different zygotes.

Compared to chimera, a mosaic is when two or more genetically distinct populations of cells show up in the same zygote. The main difference is that the cells originate from the same original organism but its genetically different because of mutations whereas chimeras come from two different individuals.

Chimerism in animals is very rare but in cats it’s pretty common. Leslie Lyons, a professor at the University of California, Davis, claimed that the male tortoiseshell cats are most likely chimeras. Tortoiseshell fur on male cats can indicate the presence of an extra X chromosome that gives the color of their coat which is unique, especially among males.

One three-year-old feline born in Paris, Narnia De La Grace, has a light grey and black fur on his head. The beautiful cat looks just like someone took two different genes of a cat and put them together.

Only half of Narnia’s face contains a grey part while its entire body is black. There’s also a small part under its neck that has white fur. Additionally, the cat has sky-blue eyes which makes it even prettier.

His owner, Stephanie Jiminez, describes Narnia as a shy kitty when he meets someone new but quickly warms up. Narnia was a hit at first in 2018 when it was still a small kitten and since then it became so famous that people requested it to appear on TV at cat shows.

After time passed, Narnia grew up to be a full-grown male cat and even became a father to two tiny kittens. These tiny kittens have the colors of either side of Narnia’s face (one is black while the other one is grey). The black-haired kitten was named Prada while the gray-haired is called Phoenix. Both kittens got their father’s blue eyes.

Stephanie claims that Narnia is happy with his two children and loves to play with them.

This isn’t the first time that Narnia fathered children. As a professional cat breeder, Stephanie informs us that Narnia became a father several times already and all of his cats have different color variations.

Two of the kittens, Orfée and Ozanna, are light brown twins. Roswell, another kitten is completely black and Rose is completely gray. Narnia also has two multicolored boys named Phantom and Polaris.

Prada and Phoenix are the only kittens that inherited Narnia’s sky-blue eyes. Stephanie claims that it’s very rare for fully colored cats to have blue eyes. She also says that it is a new gene called ‘ice’.

Narnia is expecting more of his children to be born and they are due June 29.

Aside from being born in Paris, Narnia lives full-time in Britain. Even though he was thought to be a chimera cat, Stephanie made genetic testing proving this information to be false. Narnia contains only one DNA and its face mutation will remain a mystery.