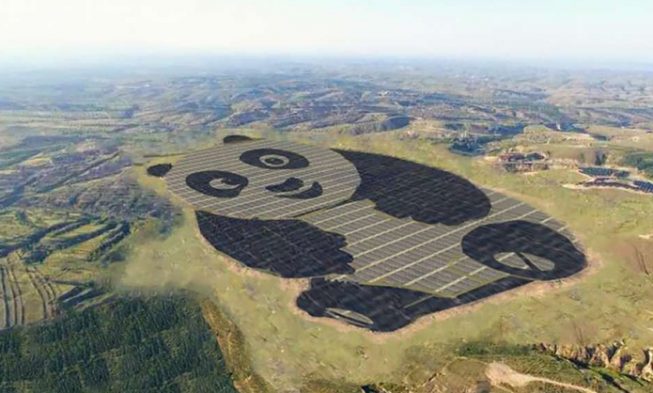 When you think of solar farms, you usually associate them with their solar arrays aligned in rows, so as to form a grid. But there is a new solar plant which has kind of an interesting design. It’s located in Datong, China and it’s created by China Merchants New Energy Group, which is among China’s largest clean energy operators. Anyways, they built a 248-acre solar farm which is shaped in a form of a giant panda.

The project consists of several phases. According to PV magazine, the first phase was completed on June 30. This phase is about one 50-megawatt plant which has just begun delivering power to a grid in northwestern China. Satisfied from the first panda, they started planning another one for the next year.

This Panda Power Plant is expected to produce 3.2 billion kilowatt-hours of solar energy, in a period of 25 years. The company states that the plant will get rid of approximately million tons of coal that were planned to be used to produce electricity, thus reducing carbon emissions by 2.74 million tons.

It wasn’t an easy thing to turn the Power Panda Plant into a reality. At least that’s what people behind the project say. China Merchants New Energy Group worked together with the United Nations Development Program (UNDP) on this project. The idea of the Giant Panda Plant is to point out the importance of clean energy. It is mostly meant for young people in China because somebody should raise their awareness about this issue. The groups hope that they will not stop here. They truly believe that in the next few years there will be more panda-shaped solar plants throughout the territory of China.