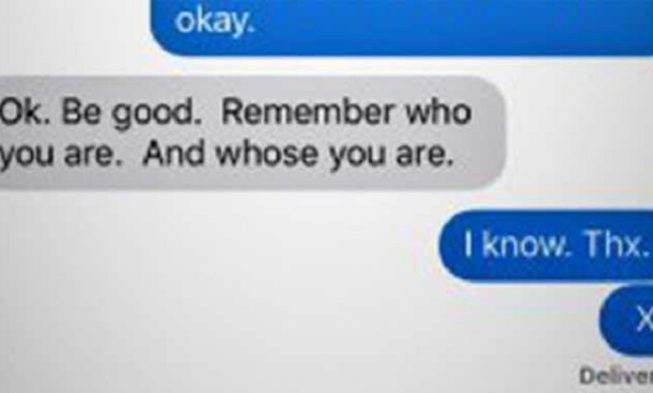 Parents do everything that’s in their power to protect their kids. Since their earliest age, their parents baby-proof the home, buy them knee pads and helmets so as to be safer when they are learning to ride a bike, and so on.

But the thing is, that kids’ parents can’t always be there. Time passes, and they grow up. So their parents hope that everything they taught them will do them good and they’ll know how to make use of it. But the truth is, kids need their parents no matter how old they are.

There’s a story of a father in West Virginia who found an interesting way to let his kids know that they need him. And no matter what, he’ll do everything to help them out.

Burt Fulks is the man who lived this story. He explained that it was in the middle of the night when he received a coded message from his teenage son. The content of the message featured the letter “X” only.

And immediately when he read it, he replied that he’ll be there to pick his son up in just five minutes. Fulks call this the “X-plan”. It’s a convenient and discrete way to get out of any uncomfortable situation. Burt Fulks, who is a pastor, got the idea while he was talking to a group of teens in addiction clinics.

Consequently, Fulks who is a father of three kids decided to use that information so as to come up with a plan that would drag his kids out of any uncomfortable situation they find themselves in. He posted his plan on his website and he’s getting support from many parents all over the world.

This father and his kids know that whenever they find themselves at a place they don’t want to be anymore, all they have to do is to send a coded message, an “X”, to any member of the family.

A very short time after that, he/she will receive a call from a family member, saying that something’s wrong and that someone will come to pick them up from wherever they are in a few minutes. And then, they just wait for that person to come as soon as possible.

So that’s an easy way to leave from a very uncomfortable situation without being laughed at or bullied by the people there.

Fulk adds that the “X-plan” comes with the mutual agreement that there will be no further questions asked about anything they drag their kids out of. Even though some parents might find it difficult not to control everything about their kids, but it will be a nice and long way to build trust between both of them.