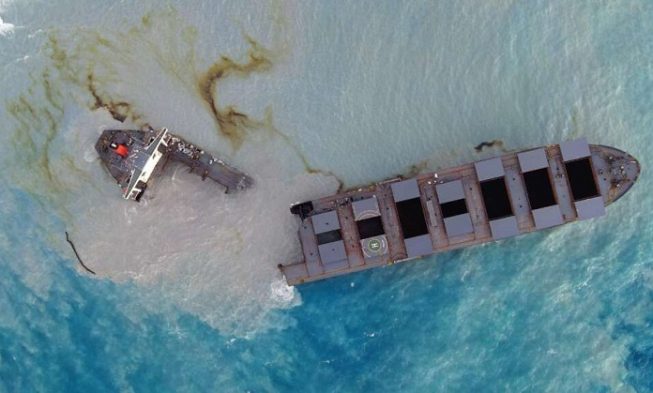 On the evening of July 25, A Japanese-owned bulk carrier, MV Wakashio, hit a coral reef near Mauritius in the Indian Ocean. The carrier sailed under the flag of Panama and carried oil. Early August, the abandoned ship was breached due to bad weather and it started leaking the oil. Around 900 tons of fuel oil leaked from the tank, spreading towards the lagoon surrounding Pointe d’Ensy, southeast coast of Mauritius.

Oil spills have a serious threat to fresh water and the marine environment. The spill can affect the environment negatively in many different ways such as physical damages impacting wildlife (or wildlife’s habitat) directly, as well as poisoning exposed organisms due to the toxicity of the oil itself. The marine ecosystem can be led to destruction, depending on the size of the spill.

Dead Dolphins Wash on the Shore

After the recent catastrophic oil spill, a bunch of dead dolphins washed on the shores of Mauritius. On August 26, 17 dolphin bodies were found on the beaches and the next day, seven more washed on. By August 28, 38 carcasses were washed up on the beaches with experts claiming that many more will follow.

The death of at least 17 dolphins is a great loss for Mauritius’s #Biodiversity, and necessitates a thorough investigation.

If the recent oil spill is indeed the cause of this tragedy, then those responsible for it MUST be held accountable! #BreakFreeFromFossilFuels
📸 :Shav pic.twitter.com/RCLsZUcgpM

Many environmentalists are demanding the start of an investigation that will determine the reason why the dolphins were killed. As of now, scientists conducted autopsies on 25 of the dead dolphins (the ones from Wednesday and Thursday) and results are expected in a week since the autopsy was done.

The preliminary autopsies showed that there were no traces of oil and only several wounds and blood around their jaws.

The dolphins that survived were very tired and could barely swim. Additionally, many crabs and fish were found dead in the area. None of the deaths have yet been directly linked with the oil spill. Until the investigation finishes, it is unclear if the oil spill is the reason for the death of these marine animals.

This recent spill is not nearly big enough compared to other massive oil spills. However, it did have an impact on the marine environment around Mauritius since they deeply rely on it for tourism (which is about 24% of their GDP).

Making things even worse, Authorities decided on August 24 to sink the vessel deliberately after it split into two. Many people were provoked by this action, claiming that the situation will be worse since it will contaminate the ocean with high levels of heavy metal toxins. Even though the spill wasn’t too large, it can still cause huge economic and environmental damage for Mauritius in years. During the cleanup, two people have lost their lives.

After the catastrophic incident, the government of Mauritius demands $34 million from Japan. This money will be invested in fishing boats that are capable of fishing further away from the coast.