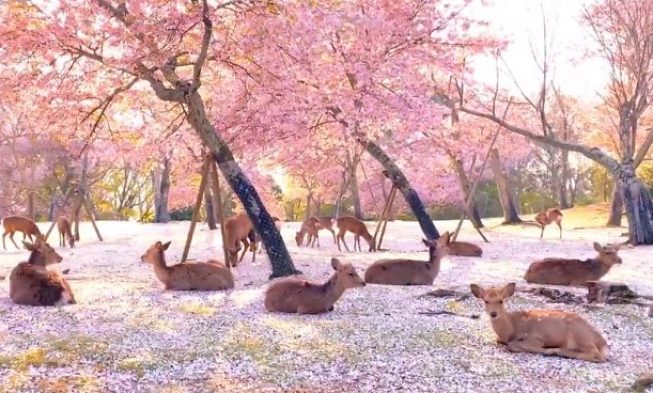 Whenever someone tells you that they plan on visiting Japan, the first thing that comes in mind is Tokyo. Tokyo is a futuristic metropolis that’s full of big buildings, skyscrapers, and shopping areas. However, there are more amazing things that you can visit while going to Japan such as its amazing parks.

One such park is the Nara Park and it’s filled with lots of attractions depending on your interest. You can visit natural and historical areas in the park as well as dine, view local wildlife, visit shrines, temples, museums, and much more.

Nara Park, also known as Nara Kōen in Japanese, is located in the center of the city Nara. The park is one of the oldest parks in Japan since it’s established in 1880.

Some of the most iconic attractions in Nara are located in the park such as Kasuga Taisha Shrine, Todaiji Temple, Kofukuji Temple, and Nara National Museum. The park is easily accessible from most major cities by using the Japan Rail Pass.

Todaiji Temple is one of the most famous buildings in Nara since it’s the largest known wooden building worldwide. Inside, you will find a large statue of Buddha, known as The Great Buddha or Daibutsu, which is about 50 feet tall.

The park is also rich in trees such as the dark evergreen trees which are located along its border. In the park, you will also see the cherry blossom, otherwise known as Sakura trees. The Sakura trees are the unofficial natural flower for Japan and hold a very important position in the culture of Japan. Many varieties of the cherry tree exist in Japan and most of them bloom for a few days in spring.

Nara Park is also filled with wildlife such as the amazing Sika Deer. The Sika Deer are honored as messengers of the gods in the Shinto Region. More than 1,000 deer roam freely in the park and they’re dubbed as the symbol of the city and even a natural treasure. The difference between ordinary deer and Sika deer is that sika deer do not lose their spots when they reach adulthood.

Visitors of the park usually buy special crackers called shika-senbei which are made from rice. You can purchase these crackers in different locations around the park and use them to feed the deer. Some deer even learned to bow to ask to be fed.

You can pet these deer with no risk of harm because they’re only semi-wild. However, make sure that you’re cautious since if they are hungry, they can become aggressive. There are safety signs in Japanese and English posted across the park so make sure you follow them.

At the beginning of March, tourists and locals started social-distancing themselves to stop the spread of COVID-19. Because of this, deer from the park started leaving it and roamed streets searching for food. As of now, more people started to go outside and the deer returned to the park.

One couple from Japan decided to take their wedding photos in the Nara Park in April. The pictures were posted by Kazuki Ikeda, their photographer, and they’ve become viral. Aside from the beautiful couple and the scenery across the Nara Park, you can spot the beautiful Sika deer enjoying a Sakura tree and lots of internet users were in awe from them.

Even though many of us are dying to go and visit this park and hang out with these beautiful deer, the lockdowns and closed borders don’t allow us this luxury. Because of that, Kazuki encourages us to enjoy the shared photos and videos on his social media accounts from our homes. He also wishes everyone to go and visit the park once the pandemic ends and enjoy the amazingness of the Nara Park and city to the fullest.

To enter Nara Park, you do not need to pay anything and it’s open 24 hours a day. However, you might need to prepare yourself to spend some money either on the deer crackers (150 yen or $1.40) or for the temples, shrines, and museums in the park (approximately 500 yen or $4.64). All of the temples, shrines, and museums are usually open from 7:30 am to 5:30 pm between April to October.