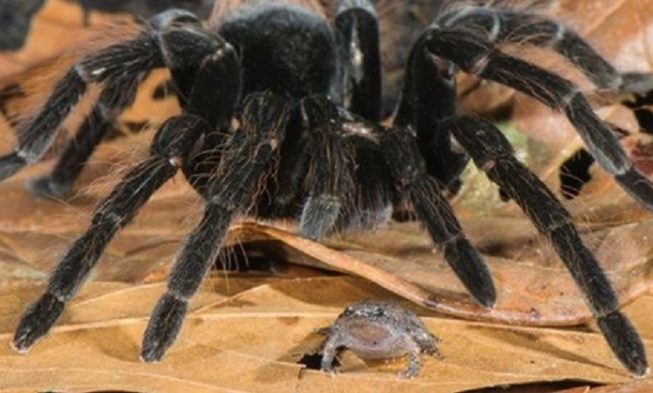 Have you heard of mutualism? Symbiosis maybe? Does “friends with benefits” ring the bell? Well, meet a couple of such friends!

Their relationship is an example of the symbiosis that exists in nature. Both species benefit from their shared life, as otherwise, the amphibians could easily be a tasty snack for the giant jungle tarantula.

This strange partnership was documented for the first time in 1986 when researchers, Reginald Cocroft and Keith Hambler studied them in southeastern Peru.

They observed and studied their behavior for almost three months.

The tarantula, which can grow up to 3 inches in length, remained in the burrow and usually came out around dusk to wait for prey at the entrance of their home. The frog did the same and came out from the burrow unscathed.

Researchers often saw the frog underneath the giant tarantula, moving below, and passing them without consequence. There were times when the tarantula shifted the leg or even moved the body for the frog to pass.

Rarely, the younger spiders would pounce on a frog as it left the burrow, but in a few seconds, they released it. As the Dotted Humming frogs were never harmed, researchers wanted to test the relationship.

After 5 weeks of observation, they added a “feeding program”, and frogs from 6 other species were dropped at the burrows in front of the spiders.

The tarantulas ate 7 out of 9 frogs, a predatory behavior they never showed towards the Dotted Humming frogs.

The relationship was challenged by other theories as well. When snakes, that normally prey on frogs, were pulled past the burrow, the giant spiders attacked them to protect the frogs.

Now, let’s explain why these unlikely friends love to live together. For one, the skin of these frogs has toxins which make it strongly unpalatable for tarantulas, but there’s probably more at play here.

Cocroft and Hambler maintain that the frog benefits by eating all the bugs attracted to the spider’s prey leftovers. They are also protected by the tarantula.

On the other hand, the frog keeps the eggs of the tarantulas safe. Microhylids like the Dotted Humming frog specialize in eating ants, which are among the biggest predators of the Columbian Lesserblack’s eggs.

So, while this relationship is still subject to extensive study and research, it seems that ensuring each other’s safety is enough for these two species to share the home despite their vast differences!

It sounds wise, doesn’t it?