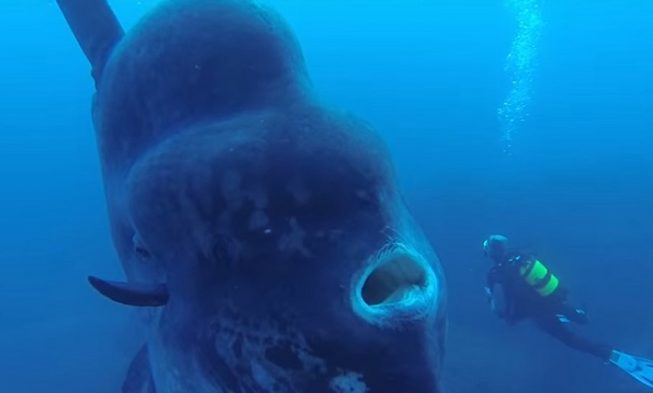 People who have tried diving claim that it’s one of the best and most exciting experiences that they’ve ever had.

Getting the chance to peek into the deep sea or ocean is majestic, however, it’s not the same satisfaction as spending the time exploring more of the world underwater.

Spotting a creature during your diving adventure in the depths of the ocean is the real adventure. Divers in Portugal got to experience this by bumping into a gigantic sunfish that was swimming near Santa Maria Island.

Sunfish’s habitat is in tropical and temperate oceans in the world. The ocean sunfish is otherwise known as the Mola mola. It’s one of the largest known bony fish in the world. They can weight up to 5,000 pounds. These fish are harmless to human beings and only feed on jellyfish.

The sunfish can be found worldwide, however, encounters like this are very rare since they spend their lives in the open ocean.

The photographer Miguel Pereira was able to capture this amazing moment on film. As the fish moved by slowly, it made the divers look tiny. Due to the clear water, the videos and photos of this encounter came out amazing.

“A few days before, my camera was damaged when the underwater housing flooded. The bad luck was compensated when diving with a GoPro I saw the giant Sunfish almost at surface level and practically static. The Sunfish seemed not to be bothered by our presence at all and followed us for 15 minutes.”

The fish was undisturbed by the attention it was getting, almost as if it was enjoying it. Pereira also said that this moment was one of the most spectacular ones he’s had in his life.